SINGAPORE - The National University of Singapore (NUS) launched Singapore's first net-zero energy building to be built from scratch on Wednesday (Jan 30) at its School of Design and Environment (SDE).

Environmentally friendly features such as a solar panel roof and a hybrid cooling system help the new building, called SDE4, to have net-zero energy consumption.

Net-zero energy means the building produces more energy than it consumes - such as by harnessing solar energy.

More than 1,200 solar photovoltaic panels help to power the entire building and produce more than 500MW-hours of energy a year, equivalent to the annual energy consumption of about 110 four-room Housing Board flats.

The building is estimated to save about $180,000 in energy costs a year, although the cost of its construction was not revealed.

NUS president Tan Eng Chye said at its launch that the building is "testament to our continuous efforts in incorporating sustainability in various aspects of our campus life".

"We hope that this novel concept will inspire future high-performance buildings and sustainable development designs in Singapore and beyond," he added.

Mr Heng Swee Keat, Minister for Finance and chairman of the National Research Foundation, officiated at the launch. 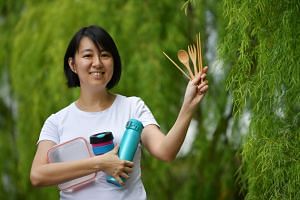 He said it is important that buildings like SDE4 play a part in tackling climate change, as the building sector contributes a quarter of Singapore's carbon emissions.

"(SDE4) is a good example of how we can achieve better and more sustainable outcomes when the Government, industry and academia work closely together," said Mr Heng.

SDE4's cooling system is designed as a single-pass system with no recirculated air as it continuously supplies fresh air to building users. The public spaces in the building are also designed to maximise natural wind through SDE4.

Construction for SDE4 began about two years ago and it is meant to hold about 400 students. Most of the spaces will be used as design studios.

Other net-zero energy buildings here are also in the works. The Tahir Foundation Connexion, also fully solar-powered, is expected to be completed at the end of this year at Singapore Management University.