SINGAPORE - Almost 230 dengue clusters were closed in the last month alone, although the total number of cases of dengue has risen from a month ago.

This is the highest number of cases in three years.

However, the number of weekly dengue cases has continued to fall, to 303 in the third week of September, down from 480 a month before.

As of Wednesday (Sept 25), the National Environment Agency (NEA) has closed 1,092 of the 1,183 dengue clusters since the start of this year.

A cluster is closed if no new case is reported for 14 days from the symptom onset date of the latest case.

But with dengue season still at its height, and cases of Zika creeping up, the NEA said there can be no let-up in efforts to keep mosquitoes at bay.

"We're clearly not out of the woods yet," said NEA's director-general of public health Chew Ming Fai on Thursday.

"The peak dengue season in Singapore usually lasts from June to October, and the weather remains quite warm," he said. 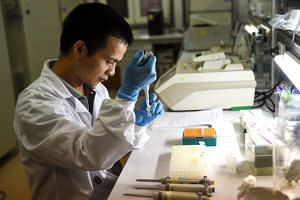 He was speaking to media during a tour of the construction site for the future Tanjong Katong MRT Station.

The largest dengue cluster currently is in Jalan Eunos, with 127 cases, followed closely by Choa Chu Kang Avenue 2, where there have been 126 cases.

Separately, four cases of Zika were reported between Sept 8 and 21, bringing the total number of such cases this year to 11.

While some may pin the blame for rising dengue figures on construction sites, the NEA's data show that the bulk of mosquito breeding habitats detected - about 60 per cent - were found in residential premises.

Mr Chew said: "We do need residents to step up... most of the breeding is still taking place in homes. The five-step mozzie wipe out is important, (so is) letting your friends and neighbours know the threat is not over and reminding them to clear the area of stagnant water."

The NEA has also stepped up its inspection of construction sites and reminded the sites' managements of the need to tackle the mosquito issue.

From January to June this year, the NEA conducted around 3,400 inspections at construction sites and issued 230 notices to attend court, 17 stop work orders, and taken 11 court prosecutions against contractors for repeat offences.

During the same time period, 12 dengue clusters were linked to construction sites, while 22 construction workers were infected with the virus.

Concerted efforts have produced results, however. Together with Singapore Contractors Association Limited and others in the industry, the agency has seen a reduction in the proportion of construction sites found to have mosquito breeding sites - just 6 per cent of the sites inspected this year to date, down from 11 per cent in 2013. 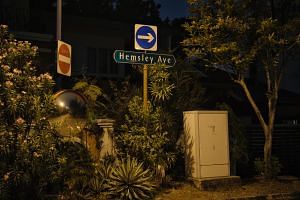 Zika cluster in Serangoon Gardens: What you need to know about the virus

A wide variety of anti-mosquito measures have been put in place at the Tanjong Katong construction site in accordance with the Land Transport Authority's requirements.

These include daily housekeeping efforts to prevent stagnant water from accumulating in the area, monitoring of the mosquito population using Gravitraps, and daily temperature taking of construction workers.

Woh Hup, the firm overseeing the construction, has also taken additional steps such as issuing its workers and staff with mosquito-repellent vests and deploying soundwave-emitting devices to destroy mosquito larvae.

Tanjong Katong MRT Station's project director Thambithurai Vasudevan, who is from Woh Hup, said: "We need to take care of our workers and our staff, this is a core value for our company."