SINGAPORE - Members of the public now have one more reason to visit East Coast Park this school holiday season. A new 5.4ha Cyclist Park opened on Saturday (Nov 23) on the site of the former Goldkist Chalets.

Located along the Round Island Route, and just across the highway from the Mandarin Gardens estate, the Cyclist Park is touted as a one-stop hub to meet cyclists' needs, with features such as a bike retail shop, a self-service bike repair station and cycling-related workshops.

The park was opened by Emeritus Senior Minister Goh Chok Tong and Senior Minister of State for Law and Health Edwin Tong, who planted an Ixora plant in its nature playgarden.

Mr Goh said: "Cycling along the marine vista is a quintessential East Coast Park experience. The opening of Cyclist Park will further enhance this experience, by adding a greater variety of recreational spaces for visitors of all ages."

The recreational space includes a nature playgarden, retail as well as food and beverage outlets for families, and two cycling circuits targeted at learners and experienced cyclists.

The 280m long Learner Circuit is designed for beginners to train their balance and stamina, and contains gentle slopes and slight narrowing of tracks at strategic points.

It also features a gently contoured terrain where beginners can challenge themselves further and practise basic bicycle motocross skills.

Ms Kartini Omar, group director of parks development at the National Parks Board (NParks) said: "The objective of this circuit is to provide a conducive area for learners to train and develop their skills and get more confidence before moving to the cycling track outside."

The Advanced Circuit, which is 500m long, contains challenges such as undulating tracks, an undulating bridge, a narrow bridge and zig-zag columns.

In order to provide natural shade and vibrancy, 800 trees have also been planted at the park.

Amid the greenery is a nature playgarden, which has logs, boulders and a 1.5m tall climbing wall, as well as a variety of carefully curated plants.

One of the park's first visitors was the United Kingdom's High Commissioner to Singapore, Ms Kara Owen, who was cycling there with friends.

Ms Owen, who completed the advanced circuit twice, said: "It was absolutely perfect because it was challenging enough... I can't wait to come back here again, I think NParks did an excellent job."

German Ambassador Ulrich Sante, who was also at the park, said: "I feel like I'm in paradise. For Germans, cycling is part of our genetic make-up - this for me is like coming home."

Singaporeans were impressed with the park as well. Sales operations manager Richard Kwok, 51, said: "I think it's quite refreshing for cyclists, it could be a good place for beginners to start learning and for families to exercise as well."

He added that the area would serve as a good pit stop when he and his cycling group ride around Singapore.

"There are very nice toilets and water points here," he said.

For some, the opening of the new park was bittersweet. 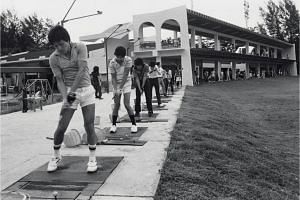 In Pictures: East Coast Park in black and white

Legal counsel Clara Toh, 51, who grew up in Bedok, said she was keen to check out the course at the park. She said it has been transformed into a more inclusive space compared to when the site was home to gated chalets.

However, she added: "I have mixed feelings - the chalets were quite precious to me growing up. Like quite a number of Singaporeans, I enjoyed barbecues and my first stay-over with friends there. It's a little sad that they're gone."

In 2017, the chalets were part of one of three sites NParks said it would carry out improvement works on - the other two being Raintree Cove and Big Splash. The announcement followed the successful redevelopment of Marine Cove the year before.

The series of redevelopments is aimed at creating more open spaces and vistas of the sea, improving accessibility and enhancing amenities in the area.

Earlier this year, Raintree Cove, which formerly contained futsal courts and food and beverage outlets such as Burger King and Long Beach Seafood, was converted into a tranquil area with swings. The aim: to allow visitors to take respite from the adjacent high-activity areas such as Marine Cove and Cyclist Park.

Big Splash waterpark, which closed permanently in 2006 and was later redeveloped as a dining and lifestyle destination, is expected to be revamped by 2020 as an active node with a water theme, featuring open lawns and water play features.

The park's iconic slide structures will be retained and converted into a vertical playground.

This will be the final stage of major redevelopment in the near future for East Coast Park.

Mr Goh said: "I look forward to the reopening of Big Splash next year, which will bring back fond memories for many Singaporeans."

THE WAVES OF CHANGE

Since its opening in 1972, the park has also seen a number of changes.

While the two ends of the park - Areas A, G and H - with their lower traffic are suitable for quiet contemplation or a leisurely bike ride, NParks has introduced a wider range of amenities throughout the park to redistribute the crowds and reduce congestion in existing popular zones. Here are three other iconic landmarks that have changed over the years:

Formerly known as East Coast Recreation Centre, its most distinctive tenant was McDonald's which opened in the 1980s.

The Centre was closed in 2012 for redevelopment, and in 2016 reopened as an area with family-friendly amenities and dining options, as well as a 3,500sqm children's playground.

In 1976, a swimming lagoon the size of 40 Olympic-sized pools, which could accommodate up to 6,000 people, was completed at the park.

It was revamped in 1977 to include a hawker centre, which opened in 1978, to cater to a growing demand for food and beverage options in the area. In 2006, a cable ski park also opened in the former lagoon area.

The jetty was built by local businessman Yap Swee Hong in 1966 for private use. It was later used by Mindef as a military base for conducting regular military exercises. It is now a popular jetty among local anglers.