Solar shades, natural ventilation and renewable energy panels are some of the prospective energy-saving features the national regulator wants to see in more Singapore buildings.

To intensify the move to a greener future, the Building and Construction Authority (BCA) has launched a new energy rating for buildings that are at least 60 per cent more energy efficient compared with 2005 building codes. This was announced by Minister for National Development Lawrence Wong yesterday at the opening ceremony of the Singapore Green Building Week (SGBW) at Marina Bay Sands.

To help more buildings qualify for the voluntary rating, the BCA is working with industry professionals, including property developers, to build such super low-energy buildings, said its chief executive Hugh Lim. The BCA is also doing more rigorous research and innovation to further push the frontier for green buildings, he added.

Previously, the highest class under the Green Mark - the BCA's benchmarking scheme - was the Green Mark Platinum, awarded to buildings that save at least half of the energy listed in the 2005 building codes.

More than 10 organisations, including the Defence Science and Technology Agency, Singapore Management University and City Developments, have pledged to achieve at least one super low-energy project in the next five years, a BCA spokesman said.

Last year, Keppel Land was awarded $1.28 million from the BCA's Green Buildings Innovation Cluster to conduct a pilot on super low-energy technologies at its building in HarbourFront. 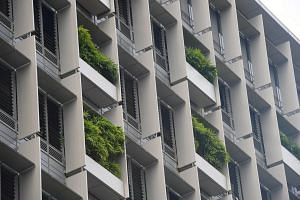 Green buildings are good for health too

It is not common for buildings in Singapore to have all of these technologies within the same structure.

That translates to an estimated overall annual energy savings of about 1.5 million kwh, equivalent to the energy required to power more than 250 five-room Housing Board flats for one year. It will also mean annual savings of about 7,000 cubic m of water, enough to fill three Olympic-size swimming pools.

When applied to the entire building, annual energy consumption is estimated to fall to 92kwh per sq m, the spokesman added.

The pilot is expected to be completed by July 2020.

At the SGBW opening, Mr Wong said next year's Green Building Week will be in a different format and include areas such as smart facilities management. He added that the organisers are looking to revamp and improve the event.

"Essentially, we want to make this bigger and better all under one roof, where there can be a comprehensive showcase of new and innovative technologies," he said.