SINGAPORE - Next year, fish, eggs and vegetables grown in Singapore could appear on more menus and in shopping carts here, as a campaign to encourage Singaporeans to grow and eat local produce kicks off.

The campaign on the Singapore Food Story was announced on Wednesday (Dec 4) by Minister for the Environment and Water Resources Masagos Zulkifli at the Asian Scientist Writing Prize Award Ceremony held at the Science Centre Singapore.

"Next year, my ministry will launch a campaign on the Singapore Food Story to encourage Singaporeans to grow and eat local produce," he said, highlighting the importance of the Republic's agricultural sector to buffer it against global food supply shocks.

Warmer temperatures from climate change and the die-off of bees due to the use of commercial fertilisers could result in food-producing countries no longer having enough to sell for export, he said.

When food supply shrinks, prices may go up.

Added Mr Masagos: "For import-dependent countries like Singapore, this is bad news. We will either have to contend with higher prices, or face a food shortage.

"Therefore, it is important for Singapore to strengthen our food security - through food source diversification, growing local and growing overseas."

He did not give further details on what the campaign strategy could entail.

But the Singapore Food Agency - formerly the Agri-Food and Veterinary Authority - had previously organised farmers' markets centred around local produce. 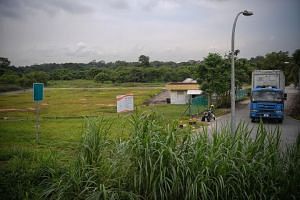 Singapore all set to embark on its own mission impossible foods

Currently, Singapore produces less than 10 per cent of its food.

But in March this year, the Government announced that it plans to increase this significantly with the help of technology, so 30 per cent of the nation's nutritional needs can be met by locally grown food.

Mr Masagos said: "To do so, we will need to push the frontiers of (science and technology) to develop high-tech, climate-resilient and resource efficient farms. This includes indoor vertical vegetable farms, close containment floating fish farms, and even alternative proteins, such as plant-based Impossible Meat and even cell-cultured meat."

Experts say the campaign to boost the profile of locally grown produce was timely, to ensure that the increase in supply of food grown here had a market.

Because the time from farm to table is shorter, produce may be fresher, he said.

Certain items, such as fruits, may also be more nutritious because they need not be harvested before they are fully ripe, he noted.

In August, a study released by the Singapore Environment Council and consultancy firm Deloitte Singapore found that close to one-fifth of imported and locally farmed fresh produce here is lost along the food supply chain every year, amounting to a loss of $2.54 billion.

The food that is lost and wasted translates to 393,000 tonnes of vegetables, fruits, fish, seafood and eggs that are spoilt and damaged during the post-harvest stage, storage, packaging and transportation, the study found.