SINGAPORE - There are benches and dustbins in the 42 "pavilions" that dot the Housing Board estate of Nee Soon South, but they were not built for picnics or as a place for people to rest their tired feet - not mainly, anyway.

These 3m by 3m sheds are designated smoking points, where smokers are encouraged to take a puff in. Many of them are located on grassy patches near HDB blocks, and are a distance away from the nearest block, so as to prevent the second-hand smoke from wafting into the units on lower floors.

There will be 50 of these smoking points by the end of 2017, up from the current 42, said Ms Lee Bee Wah, who is an MP of the area, during the launch of the smoking points on Sunday (Jan 22).

"They were a win-win solution: non-smoking residents said the designated smoking points reduced the amount of second-hand smoke they have to endure, and smokers were generally cooperative. Cigarette butt litter also reduced significantly," she said.

Ms Lee also told residents in her speech that during a busy day, about 200 cigarette butts can be collected at a single point.

Under this initiative, smokers will not be penalised if they light up outside the designated points. However, those who are caught smoking in covered linkways, walkways and pedestrian overhead bridges may be liable to a fine of up to $1,000, under National Environment Agency regulations.

When the roll-out of the 50 points is complete, there will roughly be one designated smoking point for every three blocks in the 147-block Nee Soon South estate. 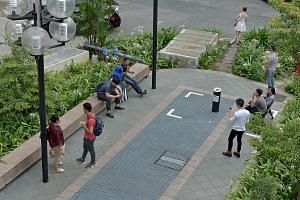 On whether the programme will be rolled out in the entire Nee Soon constituency, Ms Lee said such ground-up initiatives depend on community support, but that it was encouraging to see similar smoking points set up in Orchard Road.

The launch of the 50 smoking points in Nee Soon South follows a pilot the constituency undertook in 2014. Back then, six of these smoking pavilions were launched in Zone D of the estate, which includes Yishun Stadium, Sports Hall and Recreation Centre, as well as residential blocks 816 to 849. The grassroots leaders received good feedback from the pilot, and decided to roll out more.

Since then, the pavilions have also undergone an upgrade. Instead of sheds surrounded by flimsy plastic sheets and covered with an umbrella-like structure, the new designated smoking points have sturdier zinc roofs and taller "walls", which help to shelter users from rain. The new sheds also have benches.

The design was selected by residents of three short-listed ones in January 2016. In all, the entire project cost an estimated $500,000. The designated smoking points were sponsored by 27 private companies and individuals, including Mr Raymond Chia, the chief executive and chairman of a real estate and construction firm.

Mr Chia welcomed the initiative as one that would accommodate smokers and non-smokers, as well as providing space for people who want to light up while ensuring clean air for those who do not smoke.