SINGAPORE - A large population of around 2,800 mynahs in Potong Pasir had caused complaints about noise from residents, prompting authorities to carry out measures to address the issue.

Among these measures include pruning trees near residences and tagging mynahs in the area to study their movement patterns, the Agri-Food and Veterinary Authority of Singapore (AVA) said on Saturday (Sept 8) in response to queries from The Straits Times.

The mynahs are caught in traps that contain food and water, and are released back into the wild after they are tagged.

The traps are also closely monitored to ensure that non-target bird species are not caught, said AVA.

Mr Janan said that a big flock of parakeets, rather than mynahs, were responsible for the noise in the area, but AVA clarified that mynahs were the actual culprits.

An AVA spokesman said that since January, the authority has received about 10 complaints relating to noise caused by the mynah population in the area. 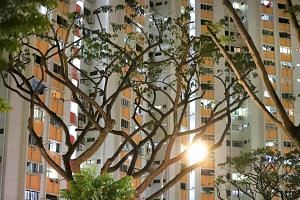 It said that noise levels in the early morning and late evening periods were affecting nearby residents.

The spokesman said: "The Javan mynah is a non-native bird that is found in urban areas and often roosts in large numbers, leading to noise and hygiene issues.

"In such numbers, they can compete with native bird species for nesting and food resources."

It is working with the National Parks Board (NParks) to address the issue in Potong Pasir. As an immediate measure to relieve residents of the noise, NParks has pruned the trees near residences to prevent mynahs from roosting in the trees.

Tagging of the mynahs enable authorities to study the mynahs' dispersal after the trees are pruned, and also provides information on the mynahs' movement patterns from roosting sites to feeding sites.

AVA said this information will provide insights into possible measures to "mitigate nuisance caused by mynahs", such as food waste management. The data will also help authorities understand which trees or sites the mynahs prefer to roost at.

Members of the public are advised not to feed mynahs and to dispose of food scraps properly, so as to mitigate the population growth of mynahs.