A dog reported missing from the Platinium Dogs Club died while boarded at the facility, the Agri-Food and Veterinary Authority (AVA) revealed yesterday.

Prince, a shetland sheepdog, was reported missing on Facebook by his owner, Ms Elaine Mao, on Dec 30 last year. She appealed for information about him and offered a $2,000 reward to anyone who found him, sparking a hunt among members of the public.

However, the AVA, which raided the Bukit Panjang boarding facility after complaints of mistreatment of pets in its care, said in a Facebook post yesterday that preliminary investigations revealed that Prince "had died while boarded there and was cremated by a pet cremation service provider".

Ms Mao, in a Facebook post, called the news "totally unbearable", adding that "a part of me has gone with him".

She said she had paid $945 to check Prince into the facility on Dec 16 before she went overseas.

Ms Mao said she had asked the owner - whose name she gave as Charlotte Liew - for video updates about her pet, but these did not always arrive. She said Ms Liew told her on Dec 30 that Prince had run out of the facility during the AVA raid the day before.

Tensions over Prince's whereabouts led to a group of angry dog owners, including Ms Mao, staging a protest outside Platinium last week.

AVA said in a Facebook post yesterday that preliminary investigations revealed that Prince "had died while boarded there and was cremated by a pet cremation service provider".

A 40-year-old man in the group was taken to Ng Teng Fong General Hospital for outpatient treatment after being hit by a car in which the operator of the pet boarding facility was travelling.

Last Saturday, Law and Home Affairs Minister K. Shanmugam called for all parties involved to let the authorities carry out their investigations and not take the law into their own hands.

The 30-year-old owner of Platinium Dogs Club was arrested on Sunday.

Both Ms Mao and Ms Liew did not respond to queries from The Straits Times by press time. 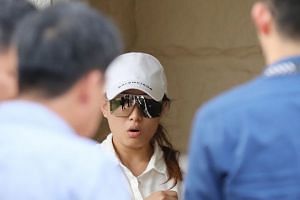 Platinium Dogs Club operator arrested by AVA, some owners reunited with their dogs

The AVA, which had taken temporary custody of the 18 dogs and one rabbit found inside the facility, said yesterday that 17 of the dogs have been reunited with their owners, while the owner of the remaining one is overseas. It has yet to identify the rabbit's owner.

Prince's disappearance was not the only controversy that Platinium had attracted in recent weeks. There are at least three other allegations online of dogs being mistreated at the facility.

On Dec 27, netizen Joanne Png posted on Facebook that her dog, a jack russell terrier, had died while under the care of Platinium.

Ms Png posted screenshots of her conversation with a woman named "Rachel", in which Rachel repeatedly avoided questions about the pet's condition.

Another dog owner, Ms Gwyneth Lee, said in a complaint posted to the AVA's Facebook page on Dec 28 that her japanese spitz was returned in an unkempt condition with a pungent smell after a week's stay at Platinium between Dec 18 and Dec 25.

An online petition appealing for stiffer punishment against animal abuse has been set up as a result of the allegations of abuse.

Investigations into Platinium are continuing.

Under the Animals and Birds Act, convicted offenders who fail in their duty of care towards animals while conducting an animal-related business can face a fine of up to $40,000, a jail term of two years, or both.

"The public is advised not to speculate and let the investigations take its course," the AVA said.