SINGAPORE - What are you doing this weekend? For a group of migrant workers, they are spending their Saturday (Oct 20) at the beach at Pasir Ris Park.

But instead of relaxing there, they will be cleaning it up - for free.

In a post on its Facebook page on Wednesday, non-governmental organisation Transient Workers Count Too (TWC2) said that about 10 workers have approached it to help with the volunteering effort.

"Despite being unemployed and without income, these men have selflessly asked to do their part and give back to Singapore," the post said, adding that the initiative has the "blessings" of the National Parks Board (NParks).

ST understands that NParks facilitated approval for the cleanup with other parties.

The volunteer group's members mostly work in construction and come from Bangladesh. They currently cannot work as they are on the Special Pass, issued by the Manpower Ministry for those lodging an injury or salary claim.

TWC2 volunteer Marcel Bandur, who is coordinating the initiative with the foreign workers, told ST that the workers thought of and proposed the idea themselves.

"Many of them used to work nearby, and went to the beach to have lunch or relax after work. They wanted to feel like a part of the community and give back to it," said the 28-year-old Slovakian, who has volunteered with TWC2 for two years.

Mr Bandur, who is also a researcher at the National University of Singapore, added that many of the workers have trouble paying for MRT train fares or meals. Such expenses are normally forked out by volunteers. 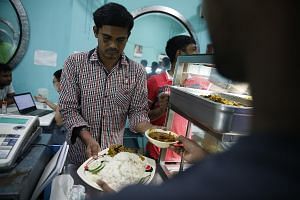 Food and fun for 3,000 migrant workers at giant potluck

Mr Israfil Ahmmad, 31, who has worked as a construction worker here for 10 years, is one of the migrant workers who suggested the initiative.

"Singapore is so clean and beautiful everywhere. We wanted to make sure the beach stays that way too," said the Bangladeshi, who is on the Special Pass after he suffered a workplace injury two years ago.

TWC2's Facebook post also asked for donations for the foreign workers from members of the public, through tickets for a fund-raising lunch in December.

More information can be found at www.giving.sg/twc2/lunch_with_heart_2018