SINGAPORE - The Land Transport Authority (LTA) has promised to release its findings on the environmental impact of drilling and other initial works done to assess if the Cross Island MRT Line can be built under the Central Catchment Nature Reserve.

The site investigation works, completed late last year, had involved the drilling of holes to extract soil samples and surveyors going into the forest to gather data, for instance.

Nature groups were worried that these activities - and the potential tunnelling of the 50km line under the nature reserve - will cause damage to Singapore's largest treasure trove of wildlife.

Last Saturday (March 17), LTA said in response to queries that the ecological impact of the site investigation works in the reserve will be shared later this year, to the relief of nature groups monitoring developments.

An earlier predictive study done ahead of the site works said these would have a "moderate" impact on the plants and animals there, but only if mitigation measures, such as the use of enclosures to reduce engine noise, were strictly implemented.

When released, details of the ecological impact of the site works could influence the ongoing debate on what should be the route of the Cross Island MRT Line.

The new line was first announced by the Government in 2013, with preliminary plans showing it cutting through primary and secondary forests in the nature reserve. In response, concerned nature groups proposed an alternative alignment skirting the reserve instead.

The authorities are now considering both alignments - a more direct 4km route, half of which would be under the nature reserve near MacRitchie reservoir, and a skirting alignment that would take a 9km route around it.

No decision has been made yet. 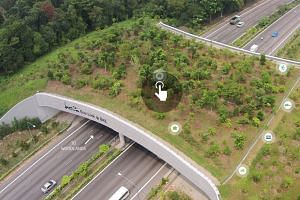 Separately, another study is being conducted now to assess the environmental impact arising from the construction and operation of the Cross Island Line for both routes. LTA told The Straits Times this study started last year and is expected to be completed later this year.

Ms Chloe Tan, spokesman for the Love Our MacRitchie Forest volunteer group, said: "We are certainly looking forward to viewing the monitoring report and hope that the site investigation works did not affect the wildlife in MacRitchie Forest too much."

She added that volunteers and members of the public have been asking the group for updates. "This shows that the developments are of public concern. Many people are waiting for the report, and we look forward to viewing it."

Dr Shawn Lum, president of the Nature Society (Singapore), said the LTA has done an excellent job so far in engaging nature groups and scientists on the matter. He added that he has every reason to believe that good faith, mutual trust and transparency will continue.

Said Dr Lum: "The Central Catchment Nature Reserve is one of the last few remaining wild spaces in Singapore. Every Singaporean is a stakeholder in that - it is our shared natural heritage."