SINGAPORE - Drop rubbish in Singapore and you might be dropping any fashion credibility you ever had.

The lurid yellow vests worn by littering offenders served with Corrective Work Orders (CWOs) and made to clean the streets have been "revamped" by the National Environment Agency (NEA) to make them even more "readily distinguishable", in a bid to deter offenders.

Now coming in an eye-catching luminous pink-and-yellow combo, the garish garments are among a range of measures being introduced by the NEA, which is also turning to technology to ensure the Republic remains rubbish-free.

The agency revealed the figures on Tuesday (May 7) and said that new technologies have "enhanced the effectiveness of our enforcement operations, by optimising the limited enforcement manpower and prioritising the monitoring of known littering and smoking hot spots". 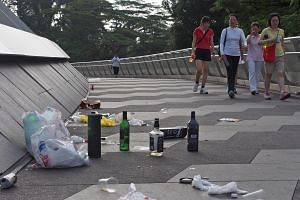 "This regime serves to increase recalcitrant offenders' awareness of the impact of littering, as well as experience the difficulties faced by cleaners," said the NEA.

The design of the CWO vest was revised to raise visibility and increase its deterrence effect, the NEA said, adding that it has been working with partners such as the Public Hygiene Council on various fronts to encourage members of the public to exercise social graciousness.

More than 410 people have also been trained under a Community Volunteer Programme to educate littering offenders to be more socially responsible.

The volunteers have engaged more than 9,900 individuals for environmental offences, including littering.

The agency added: "Everyone has a part to play in upholding high standards of cleanliness and public health in Singapore.

"NEA will continue with its educational and enforcement efforts, to encourage members of the public to exercise social graciousness and take personal ownership in keeping Singapore clean."