A migratory kingfisher that has been drawing flocks of photographers to Gardens by the Bay was released back into the area on Sunday, a day after it was rescued from an attack by another bird.

The oriental dwarf kingfisher, which is an uncommon migrant here, was seen struggling in the mud on Saturday after it was attacked by a larger white-breasted waterhen.

The waterhen had charged into the kingfisher from behind, leaving it stuck head-first in the mud for a short time, according to nature watchers.

It was unable to fly after the attack, but it has since been nursed back to health and released where it was found.

The oriental dwarf kingfisher is found in countries such as India, Bangladesh and Sri Lanka, as well as parts of southern China and South-east Asia, according to the Singapore Birds Project. It grows to a size of between 12.5cm and 14cm.

The Nature Society (Singapore) records fewer than 10 oriental dwarf kingfishers migrating here annually on average during the migration season, which starts in September. 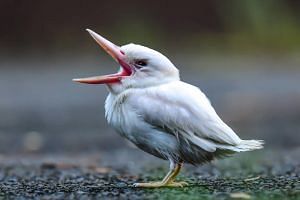 Mr OwYong, who had previously taken care of other injured birds, released the kingfisher the next day into the area where it was previously spotted, to give the bird a better chance of survival in a place where it had a food source and was already familiar with.

Since the bird's recovery, nature photographers have turned out in numbers again to capture a photo of it.

About 50 photographers were spotted at Gardens by the Bay at 6.30am on Monday, said Mr Jeremiah Loei, administrator of wildlife interest group Birds, Insects N Creatures of Asia.