SINGAPORE - The crimson sunbird may be going through an identity crisis of sorts.

On Nov 1, the Nature Society's bird group wrote in a blog post that this bird is now the "official national bird of Singapore".

The red-breasted bird though, has been unofficially touted as Singapore's national bird since 2002, when it topped a poll on the topic organised by Nature Society.

But just when its status had seemingly been made official - along with that of the Common Rose butterfly - there was another twist. 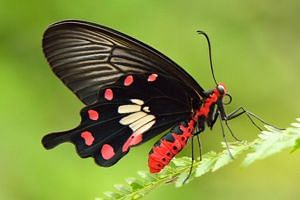 Mr Anuj Jain, the chair of the society's butterfly and insect group, indicated to The Straits Times on Monday, that the "official" status wasn't quite, well, official just yet.

ST understands that Nature Society has contacted three government departments to get the bird and the butterfly some sort of official standing, but it is still not clear on who will rule on the matter. In contrast, the Vanda Miss Joaquim has been Singapore's official national flower since 1981, approved by the then-Ministry of Culture.

Nature lovers got excited when, in a blog post titled, "Crimson Sunbird is now the official National Bird of Singapore", Nature Society said the selection had been made official and publicly announced by Dr Shawn Lum, president of the Nature Society, at a dinner held in conjunction with the 6th Asian Bird Fair on Saturday.

The same post said that the Common Rose, a butterfly, was also declared the national butterfly of Singapore. It was chosen by the public in a poll organised by the Nature Society this year.

The 2015 Asian Bird Fair, held in Singapore for the first time, was a two-day festival for bird watchers and nature lovers.

On Monday, Nature Society backtracked a little. Mr Jain said that Dr Lum had shared at a fellowship dinner that the Nature Society has "written in" to make both statuses of the Common Rose and the crimson sunbird official.

They thought the fair, which was attended by more than 20 nature clubs, would be a good opportunity to make the announcement.

However, it was not an official declaration, Dr Lum clarified on Monday.

"The information we hope will generate public interest in our natural heritage, and in that sense it is meant for public discourse. The announcement is not, however a decree and in fact reflects the wishes of people who came forward with these selections," he told ST.

Mr Alan OwYong, vice-chair of the Nature Society's bird group, said that they wanted to announce it at the fair to "claim it first" before others from the region laid claim to the bird.

Besides Singapore, the crimson sunbird is found in most of South-east Asia. It also lives in India, and Southern China, Mr OwYong said.

Voters in 2002 felt that the crimson sunbird is a suitable symbol of Singapore because it is small and active, and because of the male bird's brilliant red plumage.

The 10-cm-long sunbird received 400 votes in the poll, while the 50-cm-long white-bellied sea eagle, was runner-up with 236 votes.

Mr OwYong said that the sunbird an be seen at the Singapore Botanic Gardens, and near forests.

On Monday evening, the word "official" was dropped from the title of the blog post by the Nature Society's bird group.

Official or not, some Singaporeans gave the thumbs up to the striking bird.

"I think it's a wonderful choice, the red colour, the uniqueness, it's a beautiful bird, majestic and fit enough to be a national bird,"said Mr Johnson Ong, 48, a pharmaceutical manufacturing supervisor.