SINGAPORE - The wild otter pup which was seen on April 2 with a fish hook lodged near its eye has now been spotted free from it.

It was seen near the Kallang Wave Mall on Wednesday (April 6) morning by an informal group of otter watchers who have been checking on and photographing the animal daily since its injury was reported.

It is not clear how the hook came off; it could have been pulled out by another otter from the family group, said one of the otter watchers Nick Soo, who goes by the moniker Fast Snail, in a Facebook post on Thursday.

In all, about 10 otter watchers took more than 10,000 photographs and videos of the otter family over five days.

They spent days poring over the photos and videos, looking closely at the details of each of the five pups in the family, to verify that the hook had come off. 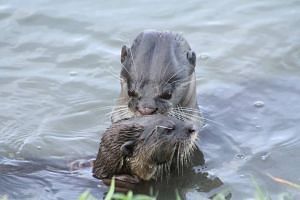 Although the pup's eye seemed reddish and slightly swollen, it was behaving normally otherwise, eating and following its family around, said one of the otter watchers, Ms Yane Kang, 40.

Ms Anbarasi Boopal, director of the Animal Concerns Research and Education Society's (Acres) Wildlife Rescue Centre, said the society is relieved that the hook has come off .

She said: "Acres is thankful to the otter watching community for their monitoring and updates," she said.

"We hope there is increased awareness of the plight of wildlife which suffer from such illegal and irresponsible fishing activities in our waterbodies, (and) we urge the public to report illegal fishing activities to the authorities."