SINGAPORE - Indonesia has enough resources of its own and does not need Singapore's help to fight the haze for now, Indonesian officials told a delegation from the Ministry of the Environment and Water Resources (MEWR) in Jakarta on Thursday (Oct 1).

The MEWR team had reiterated and explained Singapore's offer of assistance in tackling land and forest fires that are causing the haze. The offer includes providing one Chinook helicopter to conduct water bombing and one C-130 aircraft for cloud-seeding operations.

The Singapore delegation was briefed on the measures being undertaken by the Indonesian government in Sumatra and Kalimantan to tackle land and forest fires. 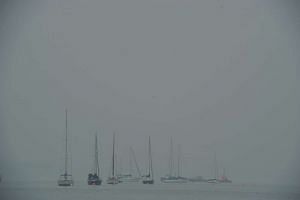 Hazy conditions to continue on Saturday, visibility likely to get worse

Also discussed were law enforcement actions being taken by Indonesia against errant companies.

Singapore explained how its Transboundary Haze Pollution Act allows it to also take legal action against offenders, and reiterated and explained its request for Indonesia to share information that could help identify companies suspected of causing such fires.

Indonesian officials said they are considering the request and will respond in due course.