Hydrogen, that simplest, most abundant element in the universe, has potential to be a game-changing green fuel for Singapore in the fight against climate change.

“For the further, but not-too-distant future, advancements in technology will increasingly see hydrogen become a key energy resource. It too could become a bedrock of our economy by helping us meet climate change goals and needs,” Second Minister for Trade and Industry Tan See Leng said at the Singapore International Energy Week in October last year.

But producing and transporting low-carbon hydrogen globally has proven costly for mass adoption so far.

Also, carbon capture, utilization and storage (CCUS) technologies are tricky for a country like Singapore with no known geological formations to permanently store carbon dioxide underground.

What is the link between hydrogen and carbon capture?

If either hydrogen or CCUS technologies become more commercially viable, that aids development of the other.

An affordable means to capture carbon dioxide would make local production of low-carbon hydrogen more feasible. Access to hydrogen would allow carbon dioxide to be turned into fuel and chemical feedstock.

Emerging low-carbon alternatives, hydrogen and CCUS technologies, have been named one of Singapore’s four energy switches. The others are natural gas — which accounts for 95 per cent of Singapore’s electricity — solar energy and regional power grids.

The Government has set aside S$49 million to fund research and development in these areas over the next five years.

As for the bigger picture, Singapore aims to halve peak carbon emissions to 33 million tonnes of carbon dioxide equivalent by 2050 and achieve net zero emissions in the second half of this century.

Exploring hydrogen and CCUS technologies is thus part of a broader strategy to diversify its energy supply. 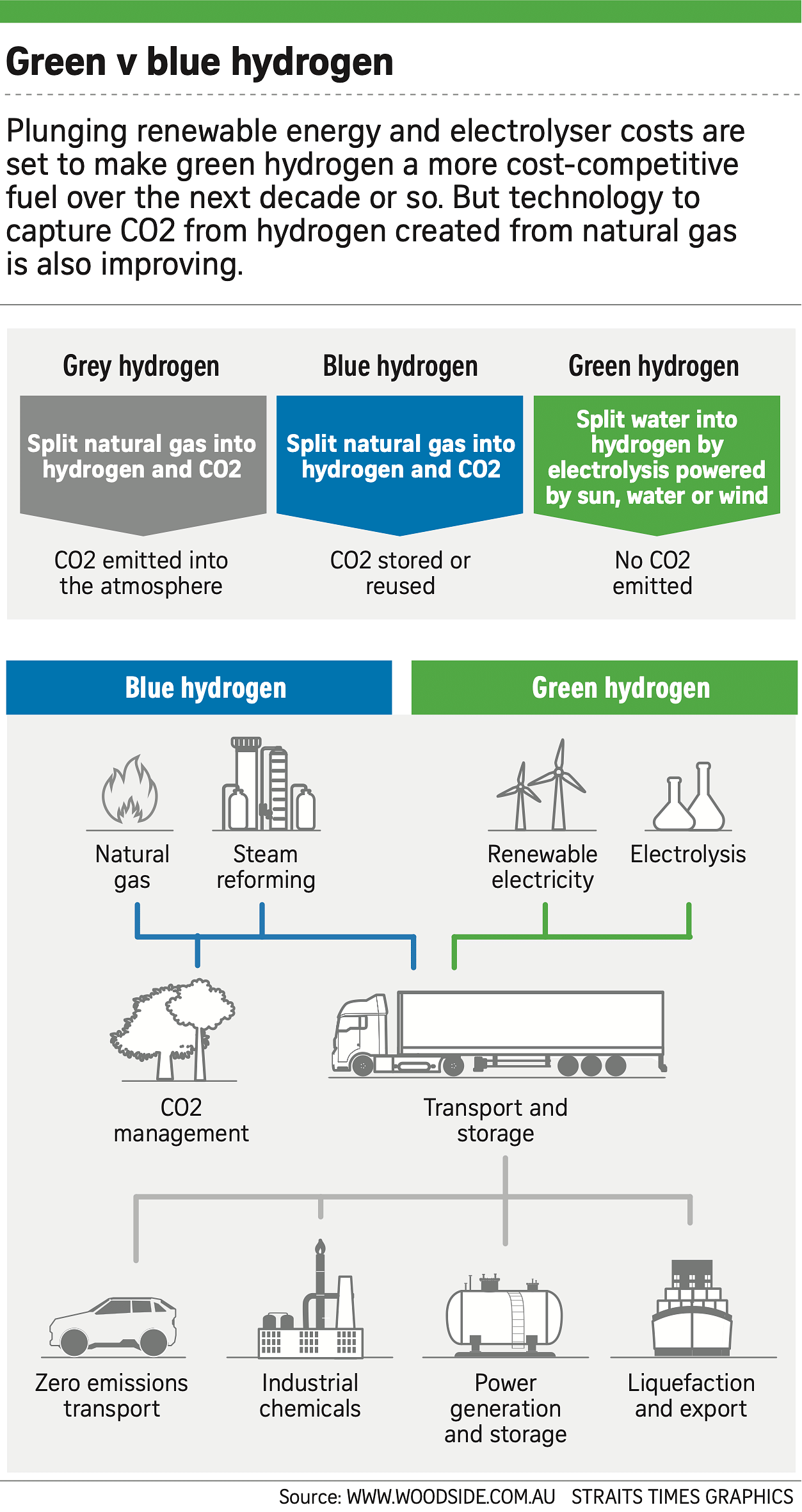 But Singapore is heading in that direction. “With significant funding dedicated to the research and development of low-carbon energy, Singapore is moving fast to prepare for a future where hydrogen plays a significant role as a renewable energy vector.”

There are different “grades” of hydrogen. The cleanest green hydrogen is made using renewable sources like solar and wind, while blue and turquoise hydrogen — though not entirely carbon-neutral — are produced with methods that emit less carbon than existing grey hydrogen.

The target researchers and industry are gunning for is US$2/kg (S$2.68/kg), but with government incentives, a reduction to US$3/kg could be enough to generate “great interest” to switch from natural gas to hydrogen, she adds.

Projections from the Hydrogen Council — a global CEO-led initiative to develop the hydrogen economy — and global management consulting firm McKinsey show that by 2030, the cost of renewable hydrogen production could range from US$1.4/kg to US$2.3/kg. Low-carbon hydrogen could break even with grey hydrogen between 2028 and 2034, they say.

Electricity generation, the maritime and heavy transportation sectors, and certain industrial processes, are areas Singapore can potentially decarbonise with hydrogen, according to a government feasibility study published in June.

What are the challenges for S’pore?

For Singapore with its limited renewable energy resources, producing green hydrogen will be challenging. This makes the cost of storing and transporting hydrogen even more salient.

Hydrogen has a far lower boiling point than natural gas, so commercially viable storage and transport is an engineering challenge — one that Singapore is taking on by exploring different carriers including ammonia, liquid organic hydride carriers and liquefied hydrogen.

Large-scale deployment of hydrogen will require the Government to put in place extensive infrastructural support, new regulations and more.

According to National University of Singapore associate professor of mechanical engineering Lee Poh Seng, who is also the director of the Singapore Energy Centre, “The use of hydrogen as a low-carbon energy source…will largely depend on the development of a wider global hydrogen economy.

"The associated low-carbon technologies have yet to reach a commercialisation phase, while the global supply chain is not yet developed.”

But, hydrogen aside, given Singapore’s refineries, power plants, petrochemical and other industrial complexes, there remains clear value to developing technology that can trap emitted carbon and convert it into valuable products.

CCUS technologies in Singapore are being explored via partnerships with companies and countries with suitable geological characteristics.

These technologies — which trap carbon dioxide and convert it into waste-based feedstock or natural minerals that are in turn made into aggregates for reclamation or building — are already being test-bedded locally.

Captured carbon dioxide could also be converted into synthetic fuels and chemicals — such as kerosene and methanol — for use as aviation and marine fuels.

“Unlike large countries such as China and the US, we do not have the full set of industries needed to complete the entire CCUS ecosystem,” says Prof Xu.

Singapore has thus been pursuing international collaboration and has already inked agreements with New Zealand, Chile and Australia to develop low-carbon hydrogen and low-emissions solutions.

Why interest in low-carbon tech is growing

UOB chief sustainability officer Eric Lim says interest in carbon capture, utilization and storage technologies in South-east Asia has been growing in view of its potential contribution to emissions reductions for the region’s energy systems.

“There are inherent economic and technical challenges for the region to be mostly or fully powered by renewable energy. The technology will thus be an important pillar in supporting the region’s alignment with climate goals,” he adds.

The bank’s interest in these issues is as a financial intermediary which bears responsibility to support the sustainability of the countries in which it operates, and is committed to supporting the development and deployment of low-carbon energy solutions.

A report by global law firm Akin Gump last month noted that though Singapore is not among the more than 30 countries that have rolled out hydrogen road maps, it has moved forward with investments in that space.

Private sector consortiums have sprung up too. For example, Keppel Data Centres will look at the viability of a liquefied hydrogen supply chain.

Globally, 359 large-scale hydrogen projects have been announced across the value chain.

If they come to fruition, total associated investment through 2030 will hit more than US$500 billion, according to an update in July from the Hydrogen Council and McKinsey.

Looking at the future of low-carbon technologies, the Akin Gump report says: “We expect Singapore to continue to develop its nascent hydrogen economy while, at the same time, closely monitor developments in other more developed hydrogen societies (such as Japan and South Korea) as these are likely to form test cases as more nations begin to take an interest in hydrogen.”

Building Sustainable Cities is a series sharing insights on how individuals and businesses can take action to forge a cleaner, greener tomorrow.