SINGAPORE - The haze may be back, and could persist in coming weeks.

If this happens, it will be the first time that air quality reaches unhealthy levels in 2019.

The National Environment Agency (NEA) said in a statement on Tuesday afternoon (Sept 10) that the hazy conditions experienced in the morning were due to smoke haze from persistent hot spots in Sumatra in Indonesia, blown in by the prevailing winds.

Hazy conditions are expected to continue over the next few days, with winds forecast to continue blowing from the south or south-east.

Said the NEA: "With hot spot activities expected to persist in Sumatra, Singapore may continue to experience hazy conditions."

For the next 24 hours, the one-hr PM2.5 concentration readings are expected to range between Band I (normal) and Band II (elevated). The 24-hour PSI is forecast to be in the high end of the moderate range, and, depending on wind conditions, may enter the unhealthy range if the haze situation in Sumatra persists or worsens.

PM2.5 is a measure of the concentration of tiny particles less than 2.5 micrometres in diameter - or about one-thirtieth the diameter of a human hair - in the air.

When the PM2.5 reading is in the elevated range, haze particles can affect the heart and lungs, especially in people who have chronic heart or lung conditions like asthma. Those with such chronic conditions should ensure that their medication is on hand and readily available. 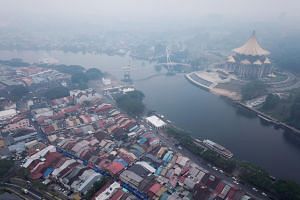 To ease haze, Malaysia ready to give Indonesia a helping hand to put out forest fires

NEA said it is monitoring the situation closely and will provide further updates when necessary. Regular updates on the haze situation can be found on NEA's website at www.nea.gov.sg

A confluence of factors

A mix of factors can contribute to the severity of haze in Singapore: Fires, wind direction and weather conditions.

Currently, all three factors have aligned for increased incidence of smoke haze in Singapore and the rest of South-east Asia.

For one thing, there has been a jump in the number of hot spots detected.

Last Saturday, NEA's Meteorological Service Singapore (MSS) said it detected 113 hot spots in central and southern Sumatra, with smoke plumes emanating from some of them. The number jumped to 380 in the same regions on Monday.

The number then rose to 537 on Tuesday, with NEA noting that "moderate to dense smoke haze continued to emanate from persistent hot spots in Riau and Jambi provinces".

It said widespread smoke haze has also been observed over many parts of Kalimantan, where 749 hot spots were detected on Tuesday.

Wind direction is not in Singapore's favour either.

THE BIG STORY: Return of the haze | The Straits Times

The Republic is currently in the midst of its south-west monsoon season, which is forecast to last until October, said the MSS in an update on Aug 19.

During this period, surface winds are forecast to blow mostly from the south-east or south-west, and on occasion, blow from the west. This means that smoke haze originating from fires in Indonesia, located south of Singapore, are more likely to affect the country.

Third, the region is currently experiencing hotter and drier weather as a result of a climate phenomenon known as the Indian Ocean Dipole.

The weatherman had warned in early August that the Indian Ocean Dipole is currently in its "positive" phase. Changes in atmospheric pressure and sea surface temperature across the Indian Ocean are causing hotter and drier weather over South-east Asia, and the effects of these are likely to persist over the coming months.

"With drier and warmer weather forecast to persist for the rest of the south-west monsoon season, we may see an escalation of hot spot activities over the southern Asean region," said the MSS in its Aug 19 update.

Mr Benjamin Tay, executive director for Singapore charity PM.Haze (People’s Movement to Stop Haze) said what while the fires in Sumatra had been burning over the past two months, Singapore had managed to avoid the smoke haze due to favourable wind directions, which are now now changing.

PM.Haze distributed some 2,000 masks to residents in Pekanbaru, the capital of Riau, last week, and is also working with the villagers of Sungai Tohor, Riau to restore peatlands and prevent haze, said Mr Tay.

However, he pointed out that it was unlikely that the haze experienced this year would be as bad as the 2015 haze crisis.

“The El Nino event that year caused weather to be much drier than what we are experiencing now, and Indonesia has also stepped up its efforts to reduce and fight fires since then," he said.

He said: “It appears that for at least the next five days or so, there is little chance of rain assisting firefighting efforts in the affected regions, so wind direction will be the major influence for haze in Singapore.”

Currently, winds are blowing from the south-east, which means Singapore is escaping the brunt of severe haze, which is now enveloping Pekanbaru and Jambi, Prof Chow noted.

He added though, that this may not last.

“There may be periodic times when the winds come directly from the south or south-west that means the smoke from hotspots closest to us will affect Singapore.”