SINGAPORE - When Japanese tourist Ken Soujiro, 39, and his family woke up on Saturday morning (Sept 14), they were looking forward to their trip to the Mandai Zoo and River Safari.

But Mr Soujiro's plans for his family on the fourth day of their visit to Singapore went awry after his four-year-old son Shouto started wheezing, coughing, and panting heavily midway through their walk around the zoo.

Mr Soujiro soon realised that Shouto was having an asthma attack, due to the thin layer of haze that blanketed the zoo in the morning and afternoon on Saturday.

"I thought at first that what was hanging over the lake and trees was mist, but it smelled like smoke. We knew that there was a haze problem here in Singapore, but we weren't expecting it to get this bad," said Mr Soujiro, who runs a business in Saitama, Japan.

He told The Straits Times that there were signs of relatively mild haze in the morning, but it worsened closer to 3pm, causing the family's eyes to smart.

The one-hour PM2.5 concentration readings hit 158 in the west and 116 in the south of Singapore at 4pm on Saturday, indicating high levels of these haze-related pollutants in the air.

"We are now leaving quickly and going back to our hotel, because my son is not feeling well. The zoo is beautiful, so it's a shame that we won't be able to see more of it," Mr Soujiro said just after 3pm. 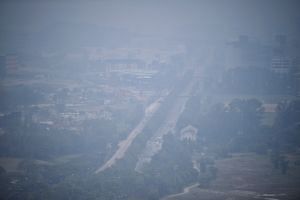 Ipoh cancels flights to Singapore and Johor due to haze; Scoot flights from Changi diverted, re-timed

Other older tourists also complained about feeling some discomfort from the hazy conditions when visiting the zoo on Saturday.

Mrs Christina Wilford, a 67-year-old retiree from the US, told The Straits Times that both she and her husband, Bernard, who is 71, were coughing.

"We both love coming to Singapore and seeing the sights, but for oldies like ourselves with chronic coughs and some lung-related ailments, it's probably best that we try to stay indoors," Mrs Wilford said.

"It is no fault of the zoo's but it is very unfortunate that the smoke is putting a dampener on our day out," she added.

Some tourists were also planning a quick exit, after seeing the PSI readings go up.

Taiwanese visitor Wu Yuming, 26, told The Straits Times that her family was seeking refuge in the zoo's air-conditioned dining facilities after "feeling like (they) breathed in smoke for over an hour" during their journey to the Jurong Bird Park.

"We have been watching the PSI readings closely, but I thought that we should just make a trip here since we do not have that many days left in Singapore," Ms Wu said.

"We even had a fun day out planned today to visit the bird park, zoo, and river safari, but we are planning to leave soon if it gets worse," she added.

Financial analyst Daniel Jang, 31, who is from the South Korean capital of Seoul, hoped the haze would not end up ruining his weekend plans.

"It's not a surprise to me that there's a haze problem here in Singapore, especially at this time of the year. It so happens that unfortunately, my girlfriend and I planned for and bought tickets in advance to go to both the zoo and the Sky Park at Marina Bay Sands today," he told The Straits Times.

Mr Jang added that the haze was manageable today, unlike the last time he had been in Singapore, when the PSI reached record highs.

"Optimism aside, with so many hot spots burning, I guess it is a reality that the haze might be here to stay in Singapore for a while," he said.