R&D is at the forefront of local environmental initiatives. In the areas of water security, food security, waste management and climate change, the Ministry of the Environment and Water Resources will continue to take steps this year to advance and better the ways in which these are managed. Cheryl Teh reports.

With $200 million to dispense in funding for research and development (R&D), national water agency PUB will push for breakthrough technology that can fulfil what scientists often call "big hairy audacious goals". One of these is to develop a system that can produce desalinated water with a low energy use of 1 kilowatt hour per cubic m.

Singapore has the technology to halve the energy required in conventional reverse osmosis desalination. Minister for the Environment and Water Resources Masagos Zulkifli announced in Parliament yesterday that Singapore is ready to scale up and deploy this technology at the PUB's Tuas Desalination Plant from next year.

"The gains from R&D go beyond solving our water problems," Mr Masagos said.

The Ministry of the Environment and Water Resources has a "30 by 30" vision it intends to achieve - to produce 30 per cent of the food needed in Singapore by 2030.

The country currently imports over 90 per cent of its food, so hitting the "30 by 30" goal will require the agri-food industry to adopt new solutions to raise productivity, look into new forms of R&D, combat climate change, and develop ways to overcome the Republic's resource constraints.

The Agriculture Productivity Fund is one of the ways Singapore can support its existing farms. For example, the fund has allowed local vegetable farms Kok Fah and Ho Ka Clean to add climate control and automation systems to their operations.

More than 90 farms have benefited from the fund.

A sum of $45 million was set aside under the Ministry of the Environment and Water Resources' Closing the Waste Loop R&D Initiative in 2017 to fund projects that adopt circular economy approaches - where all waste materials are re-purposed, creating a closed loop of production, with as little as possible being discarded.

Mr Masagos said yesterday that these R&D projects might result in more opportunities for local enterprises and, consequently, more jobs.

He cited the success of a Singapore Polytechnic team which developed a recycling process for solar panels that can potentially recover up to 90 per cent of useful materials.

While climate change must be tackled on a regional and global level, the Ministry of the Environment and Water Resources plans to press on to transform Singapore's economy to accommodate a low-carbon future. 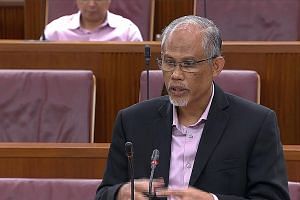 Singaporeans need to relook way they use resources: Masagos

Mr Masagos said in Parliament yesterday that the Government is prepared to spend more than the estimated $1 billion in tax revenues in the first five years, to help companies become more energy-efficient.

Meanwhile, solar adoption will be geared up, as the PUB continues to study the deployment of floating solar panel systems at four reservoirs - Bedok, Lower Seletar, Upper Peirce and Tengah. The Economic Development Board is also exploring the possibility of a commercial floating solar system at Kranji Reservoir. Together, these systems would have the capacity to power 40,000 four-room HDB households a year -about half the size of Tampines.

The ministry will also look into plans to manage transport emissions. These include promoting cleaner vehicles through stricter emission standards.

The ministry also intends to encourage the early replacement of older and more pollutive vehicles, through schemes such as the Early Turnover Scheme.

More than 40,000 commercial diesel vehicles have switched to cleaner vehicles under this scheme, Mr Masagos said.