Four more people, including a 46-year-old man, have died of dengue, bringing the total deaths this year to nine as of July 20.

The Ministry of Health (MOH) and the National Environment Agency (NEA) said in a joint reply to media queries yesterday that there were 8,020 dengue cases reported to MOH as of July 20. This is about five times more than the total number of dengue cases reported in the same period last year.

Three men died on July 16. Two of them, aged 77 and 65, lived in areas that are within active dengue clusters in Eunos Crescent and Bedok Reservoir Road. The other man, 46, had Woodlands Drive 50 as his last-known address.

Another man, who was 70, died on June 30. He lived in Hougang Avenue 5, which was within a previously active dengue cluster that ended on July 12.

Since the notification of the Eunos Crescent cluster on June 28, NEA has detected and destroyed eight mosquito breeding habitats, all found in residential premises.

For the Bedok Reservoir Road cluster, since its notification on June 25, NEA has detected and destroyed 11 breeding habitats, with five of them in residential areas. 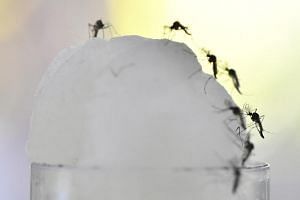 Many residents at dengue hot spot unaware of outbreak

When contacted, Marsiling-Yew Tee GRC MP Ong Teng Koon, whose ward includes the Woodlands Drive 50 area, said he and grassroots leaders were "extremely saddened" by the death in Woodlands and will be reaching out to the affected family to provide support.

"Grassroots leaders and myself, along with NEA colleagues, have been stepping up house visits to remind residents to be alert to stagnant water and to be familiar with the five-step mozzie wipeout to prevent mosquito breeding," he said.

The authorities yesterday said that while most patients recover from dengue infection, a small number may develop complications that can lead to death, especially for older patients and those with concurrent medical conditions.

They said there is an urgent need for residents and owners of premises to cooperate fully with inspection rounds and vector control operations. Between January and last month, about 60 per cent of the breeding habitats detected here were found in homes.

"The number of such breeding in homes remains high. Percentage of home breeding found in dengue cluster areas is even higher, at 70 per cent," said the joint statement.

In its quarterly report on dengue surveillance data, NEA said it detected about 5,200 breeding habitats from April to last month, a spike of about 69 per cent compared with the previous quarter.

They advised that people infected with dengue should protect themselves from mosquito bites by applying repellent regularly. Those showing symptoms suggestive of dengue should see their doctors early to be diagnosed.

The peak dengue season in Singapore usually stretches from June to October, with the warmer weather encouraging mosquitoes to breed if potential breeding habitats are not removed, NEA said on its website.