SINGAPORE - The first of four studies looking at how specific parts of Singapore's coastline can be better protected from sea-level rise will start this week.

The study focusing on the south-eastern part of the island will cover 57.8km of the coastline across three key areas - Changi, the stretch between the East Coast area and Marina Bay, and the Greater Southern Waterfront district - said national water agency PUB on Tuesday (May 18).

This city-east coast stretch of the coastline is one of four segments that PUB had identified for site-specific coastal protection studies. The other three are Lim Chu Kang, Sungei Kadut, and around Jurong Island.

Studies to protect Jurong Island and the north-western coast, comprising Sungei Kadut and Lim Chu Kang, will commence later this year and in 2022 respectively, PUB said. 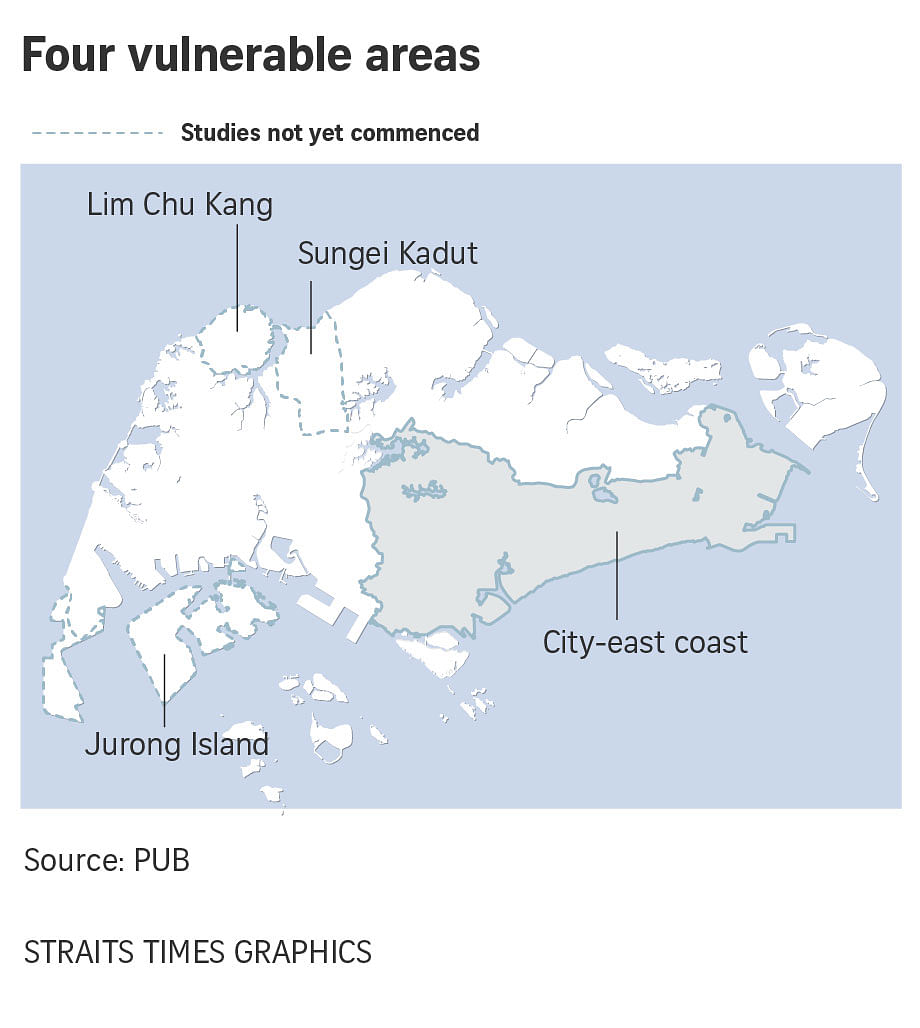 Ms Hazel Khoo, director of PUB's coastal protection department, told The Straits Times that the four segments were each a "hydraulically distinct zone". This means that floodwaters, up to a certain level, would not flow across the boundaries into other segments.

"This allows flood risks to be contained within individual segments, enabling Singapore to vary the approach, protection levels and implementation timelines across areas, as well as balance between fiscal prudence and the need to implement protection measures," she said.

The first study on the city-east coast segment costs $18 million, and will be done by consultancy CPG Consultants. It is expected to take around four years to complete, PUB added in a statement.

Areas that will be covered include a literature review to see how other nations are working to protect their coastlines, data collection and the formulation of adaptation measures and pathways, as well as the development of solutions to mitigate flood risks.

PUB did not elaborate on what these solutions could be.

But Prime Minister Lee Hsien Loong, in his National Day Rally speech in 2019, cited possible examples, including empoldering - a land reclamation technique - along Singapore's eastern coast, as well as the possibility of reclaiming a series of offshore islands there.

Asked if the study will look into the possibility of these solutions, Ms Khoo pointed to how the study is the first extensive and in-depth one to develop measures along the city-east coast segment.

"Reclaiming land to levels higher than the sea is one of the possible coastal protection options, and is a form of barrier to keep seawater out," she added.

As an island nation, Singapore is vulnerable to the impacts of sea-level rise - a symptom of the planetary warming caused by human activity such as the burning of fossil fuels for energy.

As the blanket of greenhouse gases in the atmosphere thickens, the planet warms, causing sea waters to expand and land ice to melt. Sea levels rise as a result, threatening to overwhelm low-lying areas.

The city-east coast stretch of Singapore is particularly vulnerable. For one thing, it is an area of much critical infrastructure. An airport, a water reclamation plant and a naval base are all located in Changi. 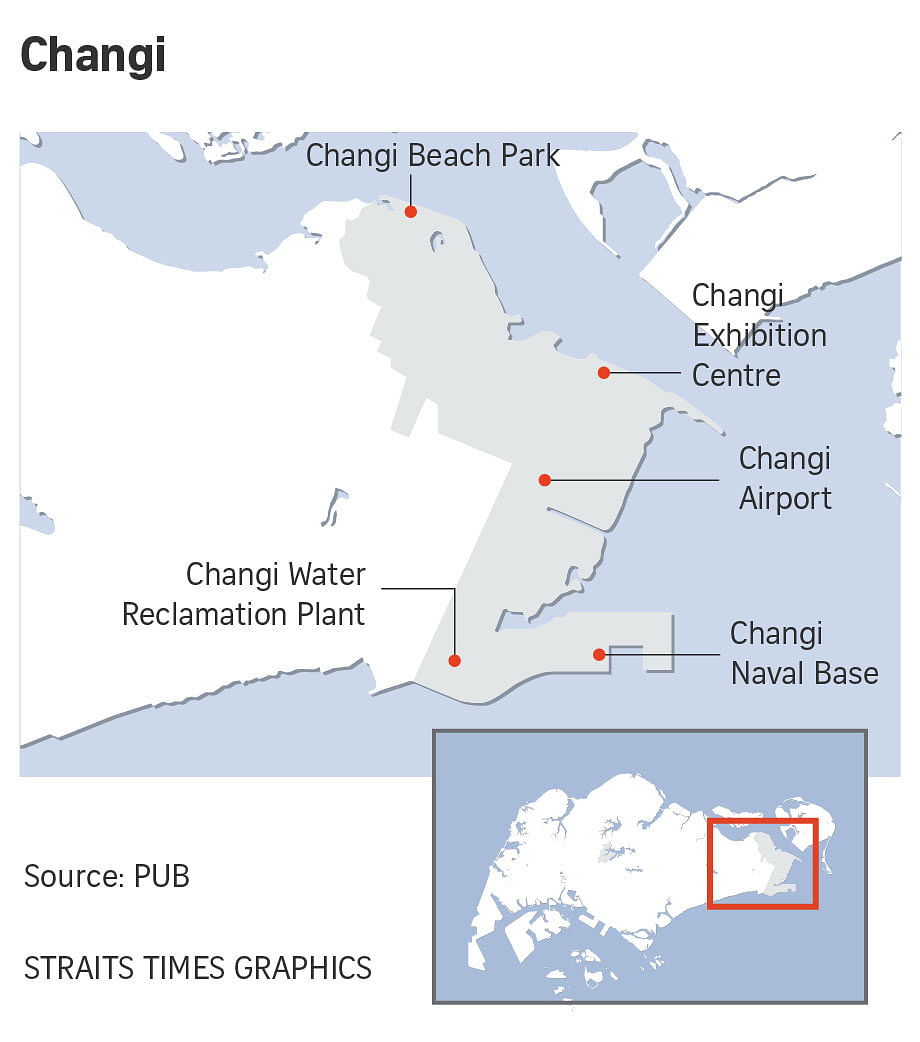 Community nodes can also be found on the south-eastern coast of Singapore. East Coast Park, for instance, is located on a stretch of coastline along the eastern coast of the island and the Marina Bay area. 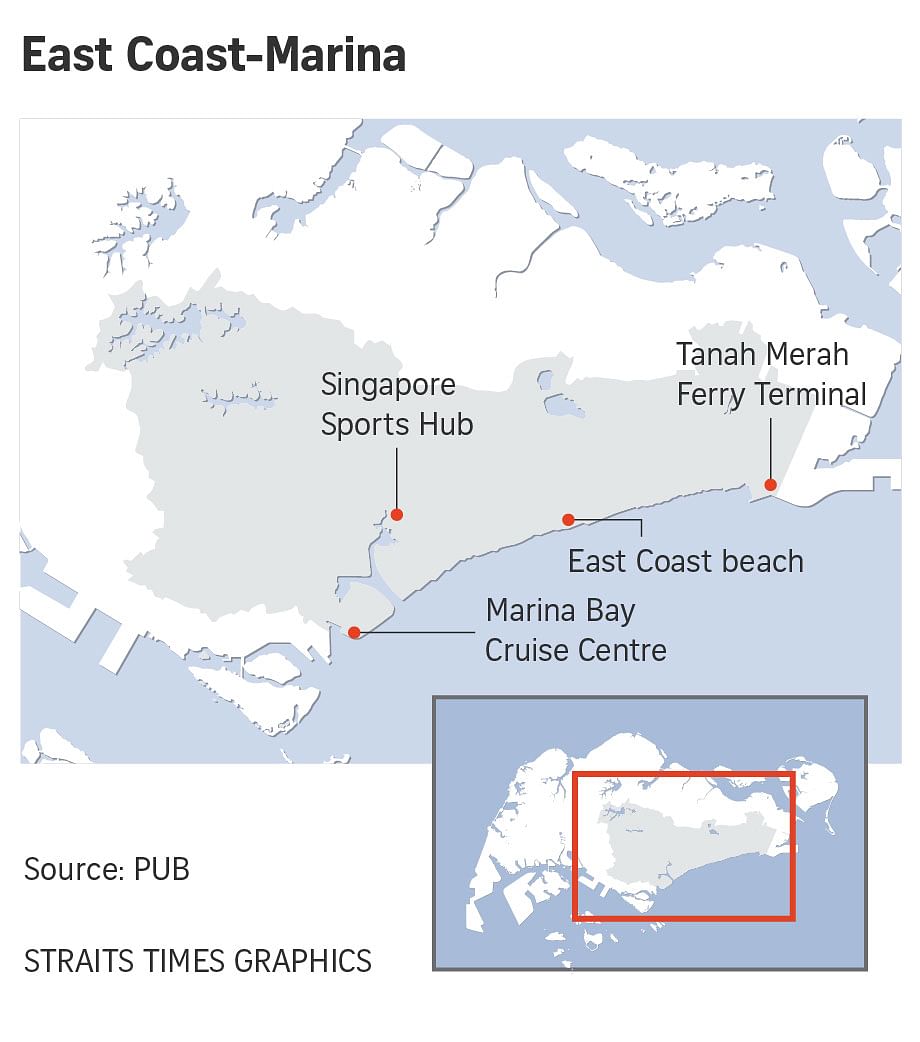 The Greater Southern Waterfront district will be transformed into an area for urban living, and is also where the Labrador Nature Reserve is located. This reserve is known for its rocky shores - a rare natural habitat that makes up only 1 per cent of the Republic's coastline today. 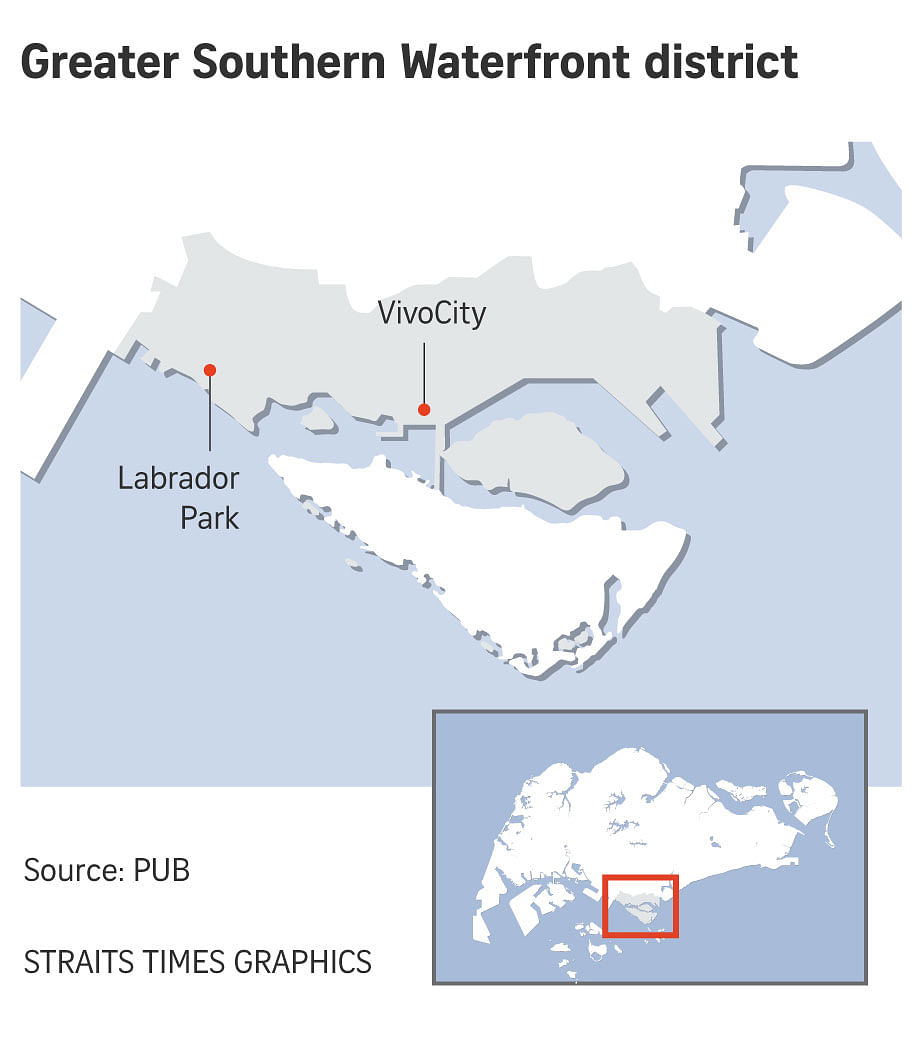 Ms Khoo said the challenge in developing coastal protection measures is to find solutions that are flexible and adaptive to climate change uncertainties. Yet, the measures must also be able to protect Singapore in a way that would make the coastlines still liveable.

"This is an opportunity for us to explore a combination of both engineering and nature-based solutions with innovative designs to better integrate with local development and land-use plans," she added.

What can nature teach Singapore about combating rising sea levels?

Flash floods in S'pore on Saturday a symptom of climate change: Grace Fu

"This will allow us to potentially enhance the living environment and create new recreational spaces with multifunctional uses for the community, like what was done at Marina Reservoir."

The Marina Reservoir, enclosed by the Marina Barrage, hosts activities such as boating, kayaking and dragon boating.

Projections for sea-level changes in the tropics are not as well known as in other areas.

Studies are ongoing in Singapore to change this. Researchers from the Nanyang Technological University, for instance, are studying past sea-level rise recorded in natural archives such as mangrove sediment cores and coral micro atolls to better calibrate global models to the local context.

The panel is chaired by National University of Singapore professor Chan Eng Soon, who is also chief executive of the Technology Centre for Offshore and Marine, Singapore.

Other panel members include Prof Marcel Stive, a Dutch engineer; Prof Robert Nicholls, an expert in climate change and sea-level rise from Britain; Prof Robert Dalrymple, a coastal processes expert from the United States; and Prof David Balmforth, who is based in Britain and an expert in urban flood risk assessment.

Prof Chan said the panel's aim is to function as an independent advisory body to PUB's coastal protection efforts.

He added: "I am glad to have the opportunity to work with a team of eminent colleagues in this field - especially in guiding PUB as it embarks on the monumental task of protecting Singapore from flooding due to intense rainfall and rising sea levels."