SINGAPORE - The number of dengue cases has fallen for the second straight week, according to the latest figures on the National Environment Agency's (NEA) dengue website.

There were 175 cases of the mosquito-borne virus last week - 66 fewer than the previous week.

With Singapore still in the traditional peak dengue season, the NEA said it is still anticipating an upward trend in the number of cases. 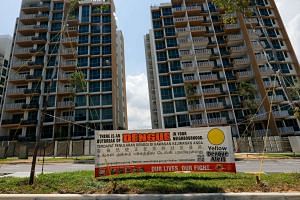 There was also a drop in the number of active dengue clusters, with 40 compared to the 64 reported last week. Ten are classified as high risk.

A cluster in Bedok remains the highest risk with a total of 64 cases, including six in the past fortnight.