The existential threat of climate change is an issue that nations cannot ignore, Minister for the Environment and Water Resources Masagos Zulkifli said yesterday at the first Singapore meeting of scientists from the United Nations' climate science body.

"We must not take our eyes off the long-term, existential challenge of climate change. Otherwise, citizens will take their cause to the streets and reason will fail to rule," he said, in his strongest comments on climate change to date.

Citizens around the world, including young people, have recognised climate change as a defining issue of their time, Mr Masagos said, citing the global school strikes for climate action and Singapore's first climate rally at Hong Lim Park last month.

"We have to give them the confidence that we are taking their concerns seriously. It is our responsibility to work together with them to address this challenge," Mr Masagos said in a speech ahead of the Intergovernmental Panel on Climate Change's (IPCC) first meeting here.

About 80 experts from the IPCC are gathered at Resorts World Sentosa's convention centre, where they will spend the next two days hammering out details on what an upcoming report on the state of the planet will include.

The Synthesis Report for the Sixth Assessment Report (AR6) is due in 2022, and will provide governments with the most updated scientific information relevant to climate change that can be used to guide policies.

The report will also draw on three special reports that the IPCC has released over the past year, including the difference in impact of a 1.5 deg C versus a 2 deg C warming scenario, and the impacts of climate change on land, oceans and the cryosphere - the frozen parts of the planet.

THE BIG STORY: Humans to blame for climate change | The Straits Times

IPCC chair Hoesung Lee said the panel had gathered to "shape a document which may be the most policy-relevant in the IPCC's history", with the AR6 synthesis report helping to mend the disconnect between the scientific understanding of climate change and the realities of climate action on the other.

Singapore is an active partner and contributor to international climate science and diplomacy, Dr Lee said, adding that Mr Masagos had told him that IPCC's reports had helped frame Singapore's policies for the environment and water resources. 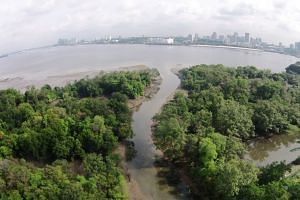 Singapore will use nature-based solutions to deal with sea level rise: Masagos

Global Affairs: When green protesters hurt their own cause

"Thank you, minister Masagos, for the confidence and trust in our work," said Dr Lee, adding that he hoped the new synthesis report of the AR6 would help nations, including Singapore, "find the best solutions for the rapid transition we need for climate stabilisation".

Mr Masagos noted that the meeting of the IPCC in Singapore was taking place at a turbulent time.

Climate change is a multilateral issue, one that requires a strong, united global response, he said.

But the multilateral system is under strain, with the rise of nationalist, isolationist and protectionist sentiments, said Mr Masagos.

He added: "Despite awareness and concern about climate change being at its highest, some governments at one end of the spectrum allow forests to be burned to clear land for economic development, and use coal for energy generation.

"At the other end, other governments respond to green demands, and threaten to impose green border taxes and trade barriers." 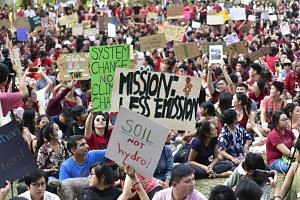 Singapore's leaders are on the side of youth concerned about climate change: PM Lee

But this momentum must be sustained. Mr Masagos added: "Everyone, every country, matters."

Even Singapore, which contributes only 0.11 per cent to global emissions, has a role to play, he said.

It plans to tackle this in three key areas: Adapting to and mitigating against climate change, basing policies on robust science and galvanising collective action.

Singapore is clear-eyed about its vulnerabilities, he said, adding: "But we can face the future with confidence, for we know we are taking early, decisive action that is underpinned by robust science."