Singapore is one of the world's top cities for its urban greenery.

When it comes to urban tree density, Singapore stands tall - it outshone 16 cities around the world in a study by researchers from the Massachusetts Institute of Technology and the World Economic Forum.

Almost 30 per cent of the garden city's urban areas are covered by greenery - more so than in cities such as Sydney in Australia and Vancouver in Canada.

Singapore's lush green spaces are the result of careful planning.

Every tree, plant or bush along the street has to be planted in accordance with guidelines set by the National Parks Board (NParks).

"A city in a garden is one where the city is nestled in pervasive greenery and biodiversity, and where the community partakes in the garden," said NParks assistant chief executive Tan Chong Lee, who is in his 40s. He has been with NParks for more than five years.

NParks manages around two million trees that line the streets of Singapore. 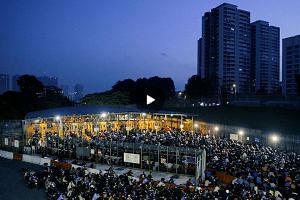 Taking care of these trees is no easy feat. NParks is currently testing new technologies to make the process more efficient.

For instance, it is testing a microdrone to help with the aerial inspection of the crowns of trees.

The lightweight mini quadcopter cuts the time required for inspection from a full day to just 30 minutes.

Go behind the scenes to witness the hard work involved in managing the garden city, in the latest episode of Singapore Works.

• Singapore Works is a video series about the people and processes behind the scenes that enable Singapore to function seamlessly.