Umbrella-sharing scheme Sharella, which aims to help those caught in unsheltered areas during bad weather, now covers a wider area.

The project, which was started in Sembawang by a group of Republic Polytechnic (RP) students, has expanded to JTC's one-north complex, a 200ha business park.

It was launched there in January as a trial at two unsheltered pedestrian crossings - between Fusionopolis One and JTC LaunchPad Block 79, and between Centros, Helios and Matrix at Biopolis.

When The Straits Times visited one-north last Friday, four of the five Sharella racks at the two locations were empty. The fifth rack had four umbrellas.

The umbrellas were bought by JTC, which had approached RP to help launch the initiative.

The Straits Times understands that each rack can hold up to 20 umbrellas, but the JTC initiative was started with about 10 umbrellas in each rack.

A senior officer in the life sciences industry, who wanted to be known only as Ms Tan, 28, likes the initiative. "Sometimes we have meetings in other parts of the estate. I've used the umbrella once... when it was raining." 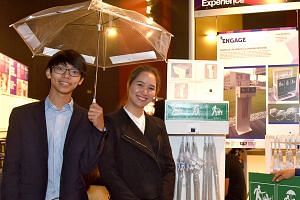 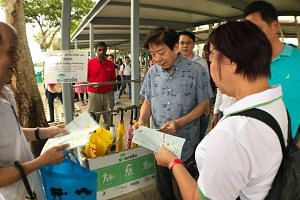 Free umbrella-sharing scheme rolled out in Sembawang, Republic Poly open to expanding it

But Mr Lee Beronio, 31, a software engineer who works at JTC Launchpad Block 79, said umbrellas are not always available. "I noticed the racks were full when the initiative first started, but not so much now."

Mr Aaron Tham, director of new estates at JTC, welcomed the initiative: "As the implementation coincided with the wet weather season, the take-up rate in one-north was brisk.

"To encourage users to return the umbrellas, we have placed prominent signs on the racks. Eventually, we hope that users will also contribute their own umbrellas."

With the addition of JTC, Sharella, which was first launched in Gambas ward within Sembawang GRC, can be found in three areas across the island - 17 spots in Sembawang, one in Ulu Pandan and two at one-north.

Since its official launch last December, Mr Joshua Hong, assistant director of capability and industry at RP's School of Technology for the Arts, said the project has "received interest from three organisations".

Mr Hong, 44, added: "The project is still in its early stages but we are quite encouraged by the results. There are people contributing their own umbrellas to the racks. Sometimes, people take the umbrellas on longer trips and return them later."

Of the six umbrella racks The Straits Times visited in Sembawang, four had at least one umbrella. These umbrellas, which differed in styles and sizes, appear to have been donated by residents.

Sembawang resident M.Y. Yeong, a 64-year-old retiree, said: "It's a good initiative, but maybe the mentality of the people (to return the umbrellas after use) hasn't caught up yet."