The capacity of the 3km-long Sungei Pandan Kechil canal has been doubled.

It has been widened by 4m in two stretches along AYE to West Coast Road and along West Coast Road to the sea as well as made deeper at some parts by up to 1.9m. The maximum depth along the canal now ranges from 3.3m to 5m deep.

A 6.5m-wide tunnel was also built under the AYE to drain water quickly from the upstream catchment areas to reduce the risk of flooding.

More recreational space has also been built around the canal.

West Coast GRC MP S. Iswaran announced the completion of the upgrading works at a National Day celebration in the area on Saturday (Aug 31).

The canal came into public spotlight in September 2013 after the AYE was closed temporarily as traffic came to a standstill because of a flash flood.

Intense rainfall coupled with a rising tide caused water from the canal to overflow onto the expressway, creating a 0.5m-deep pool.

The city-bound stretch of the expressway was shut down for 40 minutes during the morning rush hour as a result.

On Saturday, Mr Iswaran, who is also the Minister for Communications and Information, said national water agency PUB had initially wanted to just deepen the canal after the flood.

"But after discussions, we decided to make it into an active, beautiful and clean water project. So now we have a lot of facilities here, it is a very beautiful environment," he said.

Upgrading works started in March 2015, and was initially scheduled to be completed about end-2018.

But challenges such as the need to divert traffic along the AYE to facilitate the works and the influence of tide levels meant that the completion date had to be pushed back.

Traffic had to be diverted due to the construction of the 6.5m-wide supplementary box culvert under the AYE. A culvert is a structure that allows water to flow under a road, railroad, trail, or similar obstruction from one side to the other side.

PUB said the previous culvert under the AYE, which was 2.4m-wide, was unable to cater for intense storm events. 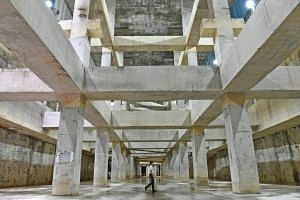 A long-time West Coast resident, Mdm Azlina Buang, 46, who has stayed in the area for 30 years, said: "There was once during heavy rain that the canal overflowed until some water actually came into the void deck, so it is very, very important that it has been improved."

The improvement to the canal is part of Singapore's efforts to boost flood resilience.

Around $1.8 billion has been spent on drainage improvement works to improve flood resilience since 2011. Another $400 million will be spent over the next two years to upgrade and maintain drains.

Meanwhile, the surrounding area around Sungei Pandan Kechil was also improved under with the ABC Waters Programme.

The programme is a PUB initiative that aims to provide new recreational spaces, improve the aesthetics of the urban environment and improve water quality through the use of natural cleansing features.

It was implemented at the canal through various measures.

For example, a 2m-wide bridge that linked residential estates to West Coast Plaza has been widened to 10m to make space for holding activities there.

Creeper plants were also planted along the stretch of the open waterway to give the canal a softer look visually.

In addition, three rain gardens, which are specially designed plots of plants, were planted along the canal.

PUB said these gardens are designed to slow down and treat surface runoff of water from the drains of Housing Board blocks, before being discharged into the canals.

An additional walkway was also built alongside the canal.

Resident Joker Tan, 60, a retiree, said: "I was telling my neighbours that our area look like a condominium now.

"We can take a slow walk, look at fish in the canal and just chit-chat with people there."

Another resident, Dr Muthusamy Karthikeyan, 45, said: "The wait for the construction to be over was worth it, we are now enjoying the new facilities after four years of construction... It is peaceful and beautiful now."