SINGAPORE - In a bid to tackle the expected spike in dengue cases this year, and with the looming threat of the Zika virus, Environment and Water Resources Minister Masagos Zulkifli said enforcement action will be stepped up against homes found to be breeding mosquitoes.

From March 14, all homes - whether they are within or outside dengue clusters - will be fined $200 if they are found to be breeding mosquitoes.

Currently, enforcement action is only taken against homes within dengue clusters.

The National Environment Agency (NEA) noted that majority of breeding grounds are still found within homes. 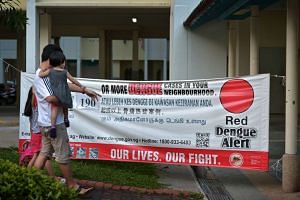 Efforts to educate residents will also be stepped up.

A nationwide campaign to urge Singaporeans to put in a concerted effort to eliminate mosquito breeding was also brought forward, ahead of its usual yearly launch around the March to June period.

Launched on Sunday (Feb 28) morning by the NEA, the 'Do the Mozzie Wipeout' campaign called on residents to actively clear their homes of any mosquito breeding over a continuous 14-day period - equivalent to two breeding cycles of mosquitoes.