SINGAPORE - A rare albino kingfisher chick is shooting to mini-stardom among the birding community here, after it was spotted last Wednesday (June 27) by wildlife observers at East Coast Park.

While white-collared kingfishers are common in Singapore, the sighting of an albino one was the first for many watchers, said observers.

The bird first flew into the public eye on Facebook pages such as the Nature Society (Singapore) group, and has made regular appearances online since.

"I think there will be much more people who are more aware and will come down. That's the reason why we shared (the photos), because we want the public to be more aware of the animals around us," said Mr Loei, 54.

The bird has had its fair share of drama. Photographers tracking it had to divert bicycles on a bicycle track when the chick unwittingly flew onto it, and wildlife group Animal Concerns Research & Education Society had to rescue the bird after it unwittingly settled in a canal on Saturday night, said Mr Loei.

Veteran nature guide Subaraj Rajathurai, 55, said it was only the second time that he had heard of an albino kingfisher in his 38 years of observing wildlife. The last known albino kingfisher was spotted near MacRitchie Reservoir Park about seven to eight years ago.

Mr Subaraj said the chick will likely stay with its parents for a few weeks, before flying off to find a new home of its own.

Photographers flocking to document the bird should do so from a safe distance, he added.

"Nowadays, with so many people out there taking photos of birds, sometimes there is an over-zealousness among all the photographers to get that special shot," he cautioned. 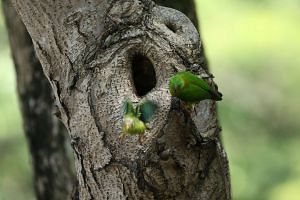 "So when you have a whole group of 50 to 60 photographers trying to get a photo of one little kingfisher, that can cause a lot of stress for the bird especially as it is a youngster."

The birding community has much to celebrate in recent times, with the sightings of various rare birds here.

In May, a photographer spotted a rare woodpecker previously thought to be extinct here at Bukit Timah Nature Reserve. Two Asian emerald cuckoos, last spotted more than a decade ago in Singapore, were also observed at Sentosa in December.