SINGAPORE - The number of Aedes aegypti mosquitoes, which is responsible for dengue, has been growing, renewing concerns about the potential for a flare-up in the disease after last year saw the lowest number of cases in 16 years.

Minister for the Environment and Water Resources Masagos Zulkifli said on Sunday (May 20) that the National Environment Agency (NEA) detected 22 per cent more Aedes aegypti in the first three months of this year compared to the previous three months.

The NEA monitors the mosquito population here through the use of gravitraps - black cylindrical devices - which are placed along the corridors of residential buildings.

"It shows that as much as we do to bring down the breeding, there is a role for everyone to not allow the breeding to happen, particularly at home," Mr Masagos said.

"We must be extra vigilant, especially since we are approaching the traditional peak dengue period," he added.

The warmer months of June to October usually see higher transmission of dengue due to accelerated breeding and maturation cycles of the mosquitoes, and shorter incubation periods for the dengue virus.

Mr Masagos noted: "One misconception in particular is that mosquitoes will not breed in clean water. That is not true...any stagnant water can attract mosquitoes to breed."

There have been four dengue deaths so far this year, with three victims living in an active dengue fever cluster in Jurong West.

Mr Masagos, who launched the National Dengue Prevention Campaign on Sunday at an open field beside 270A Punggol Field, said that NEA has stepped up checks, conducting about 265,000 inspections, including 2,400 at construction sites, from January to March this year. 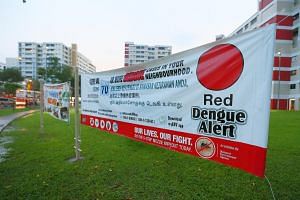 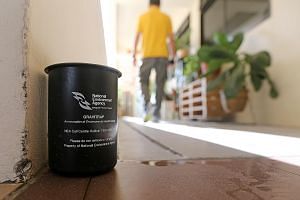 NEA found that many homes continued to be breeding mosquitoes even as the situation at construction sites had improved - dropping from 11 per cent of such sites in 2013 to six per cent in 2017.

Some 70 per cent of the breeding in the Jurong West cluster, for instance, were found in homes. Some breeding spots had up up to 200 larvae each.

Currently, homeowners face a  $200 fine if they are found to be breeding mosquitoes. There are no plans to increase the penalty, Mr Masagos said.

The annual dengue prevention campaign will have grassroots advisors, leaders and volunteers conduct patrols to check for mosquito breeding, as well as make house visits to educate  residents on how to prevent the spread of dengue.

On Sunday, Ms Sun Xueling, senior parliamentary secretary for the Ministry of Home Affairs and the Ministry of National Development, and MP for Pasir Ris-Punggol GRC, visited homes in 13 blocks with volunteers to educate residents on dengue prevention.

One resident, bank analyst Lim Jun Wei, 33, said: "It is quite scary that a bite from a mosquito can kill. The deaths has made us more aware and to take preventive steps."