SINGAPORE - The authorities have stepped up checks of worksites around Singapore after 39 workers at a construction site in Sims Drive contracted the Zika virus.

Main contractor Woh Hup has installed about 500 mosquito traps - up from 50 - around the workers' dormitories and throughout the Sims Urban Oasis condominium's construction site since the Zika cases were reported last week.

Workers are required to have their temperatures taken twice a day, while three layers of protection have been enforced: mosquito repellent, mosquito patches and a Parakito longer-term patch. Netting has also been added to the dormitory's windows.

They each have a bottle of repellent and have been told to apply it every hour, while they are also given vitamin C tablets daily.

These additional measures were observed by Minister of State for Manpower Teo Ser Luck, who visited the site at 60 Sims Drive on Tuesday (Aug 30) morning.

"We're quite glad they reinforced the preventive measures and they made sure any single workers understand the seriousness of the issue," Mr Teo told the media, adding that his ministry had sent out advisories to site operators and would step up inspections.

"We need all operators to reinforce their preventive measures right now to assure the community, the workers on the sites as well, that although the symptoms may be mild we can't take anything for granted."

He added: "For those who are a bit more negligent in this field, we will work with you but we may take action against you if you don't take preventive measures because it's a very serious issue."

A Stop Work Order was issued to the 23,900 sq m site last Saturday, after its housekeeping was found to be unsatisfactory with potential habitats favourable to mosquito breeding.

Misting and thermal fogging were also conducted. Thirty-seven cases of Zika were first discovered last week to have stemmed from the site - a 30-year-old Singaporean man who developed a fever and rash, and 36 foreign workers.

The Singaporean man was warded at the Communicable Diseases Centre (CDC) at Tan Tock Seng Hospital last Saturday. Seven of the foreign workers were also admitted to the CDC, while the rest have fully recovered. 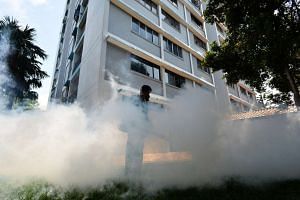 NEA, MOH step up fight as Zika cases rise to 56

On Monday, another two workers from the site were revealed to have been infected. No new fever cases were found on Tuesday, a Woh Hup spokesman said.

A total of 118 people working at the site have been tested for Zika.

Woh Hup construction manager Yong Jian Rong said the company is working closely with the Ministry of Manpower and the National Environment Agency on when the stop-work order can be lifted.

"We've briefed all our workers, sub-contractors, staff and anybody who's involved in the site based on reports on what the symptoms of the virus are and how to personally protect themselves," he said.

He added that workers' morale has been okay since news of the cases was reported. "We've been telling workers every day not to worry, and that if anything happens the company will take care of your health and give you the full medical attention you need."

Some 490 workers stay in the on-site dormitory, who are a mix of Woh Hup's staff as well as its sub-contractors. Those recovering from Zika are given separate rooms with Wi-Fi and their three meals delivered to them.

The workers who fell sick were also from a mix of companies and dormitories. Several recovered from their symptoms before it was discovered they had the Zika virus.

Mr Baskaran Murugan, 33, who had a fever, headache and conjunctivitis two weeks ago, said he told his safety officer about his fever in the morning and was brought to the nearby clinic as soon as it opened. He recovered after about a week and only found out later it was Zika.

The doctor gave him a two-day MC and medicine. "He told me to take a rest and drink more water," said Mr Murugan. The company also gave him several days of rest and vitamin C.

When asked whether he was afraid when he fell sick, he said he did not know it was Zika. "It was not difficult for me, it was just like a normal fever."