SINGAPORE - Thirty thousand trees will be planted on Jurong Island over the next three years in a greening initiative announced by JTC and the National Parks Board (NParks) on Saturday (Nov 2).

To fund the initiative, businesses in the industrial estate have raised more than $500,000 so far, with oil and gas company ExxonMobil being the largest contributor with $120,000 and the Association of Process Industry (Aspri) - comprising mainly small- and medium-sized enterprises - raising more than $90,000 among its members.

NParks said the additional greenery should help cool temperatures on the man-made island off the south-western coast of Singapore that currently is home to more than 100 petroleum, petrochemical and specialty chemical companies.

The greenery would also benefit the ecosystem and enhance the attractiveness of working at Jurong Island, said  NParks group director of streetscape Oh Cheow Sheng.

Mr Oh said NParks would monitor the effects of the additional greenery on Jurong Island as the trees matured in 15 to 20 years.

A diverse range of tree species will be planted, such as the Neolitsea cassia (Shore Laurel) and Planchonella obovata (Yellow Teak), which have been selected for their hardiness, drought tolerance, aesthetics and shade provision.

"The trees will be planted along the roadside and open spaces in a multi-tiered manner, mimicking a forest structure," said Mr Oh.

Since March, about 2,000 trees have been planted on Jurong Island, which currently has a total of about 10,000 trees.

Director of energy and chemicals at JTC, Ms Cindy Koh, said there has been an increasing focus on environmental sustainability in the manufacturing sector. 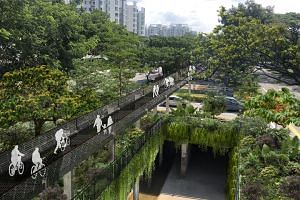 "Since we own 80 per cent of industrial land in Singapore, we see the need to co-create with our business community industrial estates that are more sustainable and attractive for businesses and talent," she added.

Mr Gan Seow Kee, chairman and managing director of ExxonMobil Asia Pacific said the company was committed to protecting biodiversity and the natural surroundings wherever it operated.

Mr Charles Quek, president of Aspri, said it was excited to make Jurong Island a more attractive workplace for its members in its first environmental sustainability campaign for the industrial estate.

"With many of our members as SMEs, we are aiming to achieve 'one member one tree' so that each of our 500 members can play a role in this inclusive campaign," he added.

The initiative was announced at the launch of the Clean and Green Singapore 2019 campaign by Senior Minister and Coordinating Minister for National Security, Mr Teo Chee Hean on Saturday.

Speaking at the event, Mr Teo said that, as a small city-state with no natural resources, Singapore will need to continue to put sustainability at the centre of everything it does.

The linear economy model of production and consumption is no longer sustainable, he said.

Singaporeans will need to shift their mindset to view waste as a resource that can be reintroduced into the production cycle, he added.

"By shifting towards a circular economy model, we can keep our precious resources in use for as long as possible," he said.

Singapore can do this in three key ways: Managing its waste better, investing in science and technology to create new products from waste, and by adopting sustainable lifestyles, said Mr Teo.

The event also saw the launch of the renewed sustainability masterplan for the South West District, called Sustainable South West.

Ms Low Yen Ling, Mayor of South West District said in a statement that sustainability will continue to be the district's core goals, and that the masterplan reflects its residents' ownership of their environment.

"While our youths are integral in the plan, we need every resident to chip in, and together we will be a concerted force for change to realise a greener, cleaner and more sustainable South West," she added.