The Stamford Diversion Canal (SDC) and Stamford Detention Tank (SDT) aim to ensure that, should the same intensity of rain as that in June 2010, June 2011 and December 2011 fall over the Stamford Catchment area again, Orchard Road will not flood.

He said: "Building bigger and bigger drains to deal with more and more intense rain is not a good method. The SDT and SDC are better ways. By detaining, delaying and diverting storm runoff before it can do serious harm, the SDT and SDC offer long-term flood protection for Orchard Road."

The two new drainage projects will ease the load on Stamford Canal, which is 4.7km long and runs from Tanglin to the Marina Reservoir, by about 30 per cent.

The 2km-long SDC will divert excess rainwater from Holland Road, Napier Road and Grange Road - which are in the upstream section of Stamford Catchment - into the nearby Singapore River, which then merges with the Marina Reservoir farther on. Rainwater runoff from these areas would flow into Stamford Canal otherwise.

During heavy rainfall, the detention tank will be able to store excess water from the drains in the above areas. Its capacity is 38,000 cubic metres, or 15 Olympic sized swimming pools.

It will take around four hours to completely empty the tank when it is full. When the rain stops and sensors detect that the drains are less than 25 per cent filled, the water from the tank will be pumped back and released.

"There was some inconvenience during the eight-year planning and construction, such as taking two minutes longer to get from one building to another due to traffic diversions, but all of our stakeholders were supportive because they understood why this project was being done," he said.

Speaking at the opening of the two drainage projects, Minister for the Environment and Water Resources Masagos Zulkifli said one of the key challenges was minimising disruption to users of the Orchard Road area. 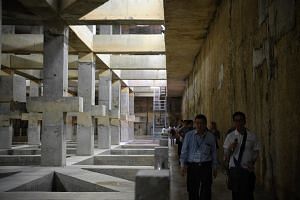 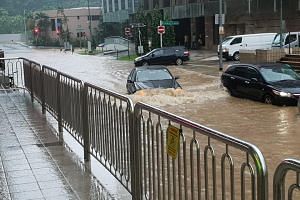 "PUB engineers had to exercise great care to protect the structural integrity of nearby buildings and roads," he said, adding: "Throughout the four years of construction, motorists remained unaware that they were driving on top of major tunnelling works, as the roads above remained open and safe to use."

Mr Masagos said: "The Government has invested $1.2 billion in drainage improvement works since 2012 and will spend another $500 million in the next two to three years... We have to prioritise our investments and look for cost-effective and practical solutions to meet our needs. The SDT and SDC are key outcomes of (this) pragmatic approach."

Assistant Professor Aron Meltzner from the Earth Observatory of Singapore said it is almost impossible to calculate how much extra capacity the SDC and SDT would have if the same rains as 2010 and 2011 happened because many factors cause floods.

"If a similar deluge happens in a slightly different location, say even 1 km away from where it happened in 2011, the water would take a different path and the details would be different," said Prof Meltzner.

He said that Singapore should expect more intense rains because of climate change, and that the highly developed urban landscape adds to the country's flood risk.