SINGAPORE - An 11-year-old boy has become the latest victim of dengue here.

The boy, who stayed at Woodleigh Close, was admitted to KK Women's and Children's Hospital (KKH) on Aug 30 and died the same day. The Health Ministry said it was told of the cause of death yesterday, after the coroner completed his report.

His residence at Woodleigh Close was found to be an active two-case dengue cluster in early September. No breeding was detected there. The cluster has since closed on Sept 14.

The boy's death bring the number of people who have died from dengue this year to eight, four more than in the whole of last year.

The last case was in August, involving a 79-year-old man living in Eastwood Drive, where there was an active cluster.

Of the rest of the victims, three were above 70, two above 60 and one was in his late 40s. The 47-year-old man, who lived in Marsiling Rise where there was an active cluster, died in January. 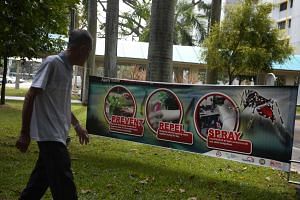 As of Monday, a total of 12,170 dengue cases have been reported since the start of the year - more than the 11,286 cases in the whole of last year. But the number of new dengue cases has fallen to a new low for the year, according to NEA's dengue website.

There were 125 cases of the mosquito-borne virus last week - 12 fewer than the previous week. It was the fifth straight week that the weekly figure had declined.

Despite the steady decline, NEA urged the public to remain vigilant and work together to suppress the Aedes mosquito population.