SINGAPORE - Singapore, a sunny island set in the sea as a song goes, may soon have "energy islands" made up of solar panels floating in the sea.

These "islands" will supply electricity to nearby industrial zones or living areas, under a project by the Solar Energy Research Institute of Singapore (Seris) housed at the National University of Singapore.

It is one of three projects launched on Thursday (April 5) as Seris marks its 10th anniversary at an event at the NUS Shaw Foundation Alumni House.

The "energy islands" project comes as the Government looks to expand the world's largest floating photovoltaics (PV) testbed at Tengeh Reservoir - run by Seris, PUB and the Economic Development Board - to other reservoirs in the next few years.

In another project, Seris will work on developing more efficient solar cells with Nanyang Technological University and the National Research Foundation's Campus for Research Excellence and Technological Enterprise. The aim is for the cells to convert 30 per cent of the sunlight it absorbs into energy - surpassing the current world record efficiency of 26.6 per cent.

As for its third project, the institute is looking to develop cheaper and more efficient solar panels that can be integrated into buildings to overcome land constraints.

In a statement congratulating Seris on its 10th anniversary, Deputy Prime Minister Teo Chee Hean noted that solar energy is presently the best alternative energy option for Singapore, in terms of economic and technical viability.

For instance, the costs of solar energy have been reduced by about 85 per cent in the last decade, and are now competitive with fossil fuel-based power in many countries, including Singapore.

By 2020, Singapore aims to put in place enough solar PV systems to supply 350MWp of electricity  - about 5 per cent of projected peak electricity demand here.

Mr Teo said there is a global shift towards renewable energy and Singapore is in a good position to trial cleantech solutions, which can be scaled for other cities in the Asia-Pacific, particularly as they seek options to tackle energy and sustainability challenges.

He said research initiatives and supporting services have helped to anchor a new ecosystem of more than 100 clean energy companies here, an effort that Seris has played a large role in. 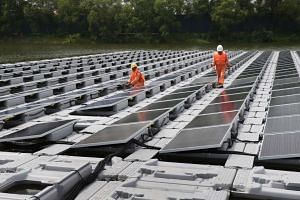 With several breakthroughs under its belt, research funds flowing and an elite team of researchers, the Seris has had a good run this past decade, said Seris’ chief, Professor Armin Aberle.

Today, it has a team of 220, including scientists, engineers and technicians. It has also groomed 110 PhD students, of whom 52 have graduated and join the solar power industry.

Seris has also garnered $30 million in funds from the industry over the last decade.

Among its breakthroughs is a real-time monitoring system with high reliability and availability. The monitoring system provides the backbone for the well-known "Live irradiance map of Singapore", which provides data that can be used to develop ways to overcome the intermittency of solar energy, due to factors like cloud cover.

The institute is also a forerunner in developing new solar panels, including the TwinPeak panels, which have at least 7 per cent more power than standard panels.

The future for solar technologies is bright, said Prof Aberle.

Solar energy is progressing rapidly and expected to gain an increasing share of the power generation mix.

"This in turn will help Singapore to achieve its carbon emission targets, and at the same time will provide a clean, green and healthy environment for future generations," he said.