In a vast airspace more than 20 times the size of Singapore, an air force Heron 1 unmanned aerial vehicle (UAV) operating silently detects and tracks six vehicles moving in a line.

This information is sent back to a command post at the Mountain Home Air Force Base in the United States, which determines that the vehicles are, in fact, enemy forces.

The command post requests four F-15SG fighter aircraft, which use lasers to target the vehicles and destroy them simultaneously to prevent any of them from escaping.

The ability of the Singapore Armed Forces (SAF) to conduct such end-to-end missions - from detection to live firing - is being honed at the biennial Exercise Forging Sabre, which returns for its seventh edition at a new location in Mountain Home, Idaho.

The Mountain Home Range Complex, about an hour's drive from Idaho's capital city of Boise, is where about 600 SAF soldiers are being been put through such training in both day and night scenarios since last Monday.

It also has more urban structures and is larger than the training airspace in Arizona, where the last four editions of Forging Sabre were conducted. 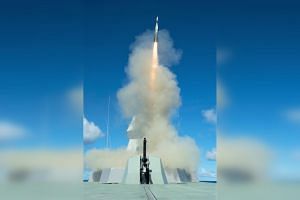 The commandos on the ground provide information for strike assets such as the fighter aircraft to destroy targets with greater accuracy, and also to avoid collateral damage and friendly fire.

Exercise director Brigadier-General Ho Kum Luen told reporters that the value of Forging Sabre is the ability to do this end-to-end training, which cannot be done in Singapore.

He said that the complexity of the exercise comes in when different components work together, such as intelligence assets feeding information to the command post and munitions actually hitting the targets on the ground.

"So this end-to-end exercising is something that Exercise Forging Sabre gives us that we cannot do anywhere else," said B-G Ho, who is also the commander of the RSAF's Air Combat Command.

He added that the MRTT allows increased endurance and range for the RSAF's fighter aircraft.

"This allows the decision makers at the command post more flexibility in choosing the strike assets to prosecute the targets around the target area."

Other than the Mountain Home range, high explosives live firing is also conducted at the Utah Test and Training Range.

To ensure realistic training, moving targets are towed by remote-controlled vehicles. There are also smoking targets which simulate surface-to-air missiles and radar emitters for fighter aircraft to react to.

This is done through, for example, increasing the number of targets that are to be struck simultaneously, and shortening the "sense-to-strike" loop.

"We want to keep this loop as short as possible, and this is what we have been challenging our warfighters to do throughout the exercise," he added.

A version of this article appeared in the print edition of The Straits Times on October 08, 2019, with the headline 'End-to-end action for SAF at exercise in new US location'. Subscribe
Topics:
More
Whatsapp Linkedin FB Messenger Telegram Reddit WeChat Pinterest Print Purchase Article Copy permalink