SINGAPORE - A total of 1,190 employment claims were filed at the State Courts in the year since it launched the Employment Claims Tribunals on April 1, 2017.

In a statement on Tuesday (April 24), the State Courts said that more than 80 per cent of the cases were closed by March 31, with a majority of them concluded within six months.

Of these, three out of four claims ended at the case management conference stage without the need for a full hearing.

A total of 732 money orders, which require one party to pay money to the other, were granted, while other cases were either dismissed or withdrawn.

The tribunals, which were set up as a speedy low-cost avenue to help employers and employees in their disputes, see both statutory and contractual salary-related claims.

Under the Employment Claims Act 2016, the tribunals have the jurisdiction to hear claims of up to $30,000 if the dispute has gone through mediation assisted by the unions.

Employees outside the scope of the Act, such as professionals, managers and executives (PMEs) who earn more than $4,500 a month, can turn to the tribunals for help. They previously had to pursue their claims through the civil courts, "which was not always the most cost-effective option for lower value claims", the State Courts said.

This group of PMEs formed about 25 per cent of individuals who had filed employment dispute claims since the launch, the State Courts added.

Giving a breakdown of the types of claims it has seen, the State Courts said that about 78 per cent of them involved unpaid or short payment of salary or allowance. 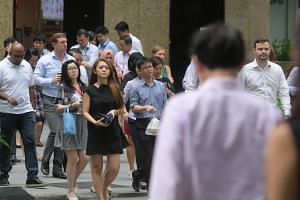 Employment Act will be widened to cover workers earning more than $4,500

Other common cases include disputes about overtime pay (37 per cent) and salary in lieu of notice (27 per cent).

Among the PME cases heard by the tribunals during the year involved Mr Lee (not his real name), a sales manager embroiled in a dispute over payment of commission.

Mr Lee, who earns a basic salary of $4,800, had been entitled to a commission if he hit his sales target.

He claimed that the company did not pay him his full commission earned on his last working day, and the total payment was also short by four months.

This was disputed by the company, which cited terms and conditions in its employee handbook that state a staff member had to be in service to be eligble for commission payment.

The company argued that this meant that commission due after Mr Lee’s last day of service should not be paid, including commissions claims that were not submitted or approved before Mr Lee’s notice of termination was given.

The tribunal magistrate eventually awarded Mr Lee the $20,000 commission owed to him.

In the statement, the State Courts said that an ongoing review by the Ministry of Manpower (MOM) will further streamline the dispute resolution process for employers and employees.

In 2019, the tribunals are expected to take over the adjudication of wrongful dismissal claims, which are currently heard by MOM.

"As dismissal-related claims are usually coupled with salary issues, the affected employee has to go to two different parties to resolve their issues," the statement said.

Those who wish to bring a claim before the tribunals must first register at the Tripartite Alliance for Dispute Management and undergo compulsory mediation.

Only disputes that remain unresolved may be referred to the tribunals.