SINGAPORE - The employment agency that "sold" maids on online retail platform Carousell has had its licence suspended.

In a statement on Wednesday (Sept 19), the Ministry of Manpower (MOM) said it has established that employment agency SRC Recruitment was behind the maid advertisements.

The ministry said the agency has been served with a notice of licence suspension and can no longer deploy any new foreign domestic workers (FDWs) for employment.

The MOM also said it was investigating the agency with the view to taking prosecution actions for infringements under the Employment Agencies Act (EAA).

The suspension will remain for as long as investigations are ongoing, the ministry said.

Mr Kevin Teoh, Commissioner for Employment Agencies, said: "The MOM is committed to protecting the well-being of FDWs in Singapore.

"We strongly condemn the advertising of FDW services in an undignified manner. Advertising FDWs on an Internet platform meant for trading goods is completely inappropriate and unacceptable. Such an act is an offence under the EAA."

Mr Teoh added that MOM takes a very serious view on the matter and will not hesitate to prosecute errant agencies.

Sharing the MOM statement in a Facebook post on Wednesday night, Manpower Minister Josephine Teo said she was “deeply disturbed” by the advertisements marketing maids.

“It pains me to think that our FDWs, many of whom are someone’s daughter, sister and possibly even mother, are being marketed in such a manner. It is a given that we should treat them with respect,” she said.

The MOM was first alerted to the Carousell listings on Sept 14 and put up a Facebook post to warn other employment agencies against such practices.

The ministry also told Carousell to take down the offending posts.

Said the MOM in its statement: "MOM expects all employment agencies to exercise a duty of care towards their clients, including FDWs. 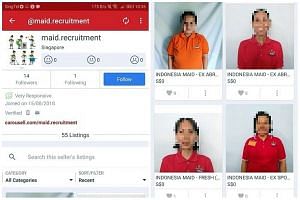 MOM investigating cases of maids being 'sold' on Carousell

"The ministry sternly warns employment agencies against similar actions that would denigrate the dignity of FDWs working in Singapore."

The ministry said it was in touch with the Indonesian Embassy, which has been informed of the matter and that the MOM was investigating the case.

The listings on Carousell were posted by user @maid.recruitment and showed the faces of several maids, allegedly from Indonesia.

Some of the posts indicated that the maids had been "sold".

The postings had prompted the Indonesian Embassy to say that it would request a thorough investigation of the advertisements.

According to The Jakarta Post, the Indonesian Foreign Ministry's overseas citizen protection director, Mr Lalu Muhammad Iqbal, had said on Sunday that the Indonesian Embassy in Singapore had voiced concerns about the practice to the MOM.

He was quoted as saying that the embassy would send a diplomatic note to Singapore's Ministry of Foreign Affairs to express concern that similar incidents had occurred several times and to request a thorough investigation of such cases.