SINGAPORE - Electricity supply to some areas in central Singapore was disrupted on Thursday afternoon (Feb 14) due to equipment failure at the substation serving Carlton Hotel. The affected areas were parts of Bugis, City Hall, Marina and Somerset, SP Group said.

The equipment failure also caused an electricity flashover, resulting in a fire at the hotel which was put out by Singapore Civil Defence Force officers.

SP Group said in an update at 5.32pm: "We are working closely with the hotel, which has confirmed that power supply is available in common areas, including air-conditioning."

The electricity and gas supplier added that it was working to restore supply to the hotel through a bypass circuit. Power was fully restored to the hotel at 6.34pm.

In a Facebook update at 3.47pm, the electricity and gas supply company said that supply has been restored to most of these locations by 1.21pm, except for Carlton Hotel. The disruption began at 1.09pm.

"Our officers were immediately deployed to the affected areas and our priority is to restore supply as safely and quickly as possible," SP Group said in an earlier post at 2.36pm.

"Our teams are carrying out works at the substation serving Carlton Hotel to restore supply as soon as possible," it said.

At 7.56pm, SP Group apologised to those who were affected by the disruption on Thursday and said that the equipment had been inspected on Feb 1.

"Taken together with the incident at the Bright Hill substation on Jan 26, we will conduct a thorough investigation of both incidents," SP Group said.

In a Facebook post, Carlton Hotel said that the fire that occurred in the SP substation serving the hotel was reported at 1.15pm on Thursday.

"As the SP substation is located on the ground floor of our hotel, for the safety of all our guests, we initiated an evacuation of everyone in the building," the hotel said.

Carlton Hotel said that no part of the hotel was damaged by the fire, as the fire was contained within the substation.

It confirmed that all power was fully restored at 6.50pm after checking all its systems.

The Energy Market Authority (EMA) said in a statement on Thursday that it is investigating the cause of the power supply disruption.

"Depending on the outcome of our investigations, we will decide on the appropriate action to take against any party found to be responsible for the disruption. We apologise for the inconvenience caused," EMA added.

The power outage was due to a dip in the power grid network and emergency lights were turned on during the outage.

"Train services were not affected by the power outage," SBS Transit said.

However, other services such as the lifts and escalators were affected and not working.

Train operator SMRT said that Dhoby Ghaut and City Hall MRT stations were briefly affected by the power outage. One escalator at each station was down, but train services were not affected.

"Our station staff immediately attended to the fault and the escalators have been put back in service," SMRT added.

The 7-Eleven outlet at Clarke Quay MRT was one of the stores which was affected during the power cut.

One of its employees, Ms Helen Teo, 50, said that the lights and air-conditioning were restored at her store not long after the blackout.

However, the CCTV and fridges were still not working at around 2.50pm, she told The Straits Times.

Several commercial buildings, including Chijmes, The Gateway and Plaza Singapura, were also affected by the electricity supply disruption.

Mr Loh Weiwen, 36, said that the power at his office in The Gateway went down at around 1pm. It was the same for other buildings in the area, he said, adding that the ventilation in his office was poor with the air-conditioning down. 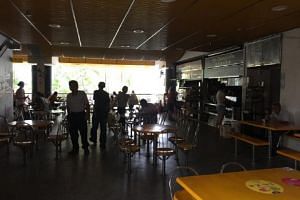 Ms HanYin Lu, 36, posted a video of the blackout at Dhoby Ghaut MRT on Facebook at about 1.30pm.

The sales executive, who works in a shop in the station, said that the blackout lasted for about 20 minutes, but the MRT gantries were still working.

"Everyone was quite calm even though there was a blackout," Ms Lu said.

Ms Mabeline Chea, the manager at Lei Garden in Chijmes, said that the power was down in the restaurant for 10 minutes from 1.10pm.

Electrical supply to all lights, air-conditioning and kitchen power outlets were cut off at the restaurant. There were about 450 customers then, said Ms Chea.

"The customers were surprised when the lights went out, but they continued eating. Some asked if it was a Valentine's Day prank," she said.

Ms Chea added that food preparation was not affected during the power cut.