SINGAPORE - The fire that engulfed a Samsung washing machine in a Bukit Panjang flat last week was caused by an electrical short circuit likely brought on by moisture in the bathroom where the machine was placed.

In a media statement to The Straits Times on Thursday (Nov 17), the South Korean electronics giant said: "Samsung has completed the investigation into the incident involving our washing machine.

The flat owner, a 51-year-old technician, said his 42-year-old wife was doing her laundry in the kitchen toilet. 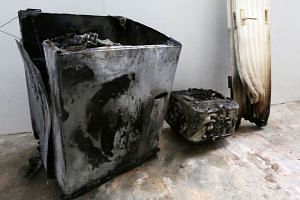 She left the washer for less than 10 minutes, but rushed back after she caught a whiff of an unusual smell, only to find the machine engulfed in flames and thick smoke.

All that was left of the machine after the fire was extinguished was charred metal. The toilet walls, ceiling and air-conditioning pipes were also burnt.

Samsung said washing machine users should not install the appliance in an area exposed to moisture or weather, or in an area which may be prone to water leaks.

It added that in the event of a water leak, users should allow the machine to dry naturally.