Jurong West hawkers cite fees to use system, delay in getting money among challenges

Even as the use of cashless payments like ez-link card and Nets has grown in the Jurong West hawker centre that is blazing the trail for e-payments, patrons and hawkers there say cash remains king.

When it opened last October, the hawker centre in Jurong West Street 61 was among the first to embrace the push to go cashless. Stalls there accepted eight different kinds of e-payments including ez-link cards and Apple Pay.

The centre was cast in the spotlight this week when EZ-Link and Nets announced a partnership that would allow customers to tap their ez-link cards on Nets terminals at an initial 1,000 hawker stalls.

When The Straits Times visited the hawker centre this week to see how the cashless payment experiment was working, stallholders and patrons painted a mixed picture - making it clear the promises and challenges of cashless payments were playing out there.

Some hawkers say up to four in 10 of customers pay using e-payment systems; others say the number is closer to two in 10. Three out of 20 stalls open for lunch yesterday had removed their cashless payment terminals. "Our e-payment terminal has been down for a few weeks," said a herbal soup stall owner who wanted to be known only as Mr Tan. "It jammed up a few times because it couldn't scan a card."

Hawkers, such as Mr Tan, cite some of the common drawbacks of cashless payments as the reasons they are sticking to cash - some e-payment systems incur fees, while others do not credit the accounts of the stallholders instantly.

Japanese food stall owner Richard Chee sees only 20 per cent of customers opting for cashless payment, and even fewer using ez-link cards. "The profits we get from the cashless options... we use to offset the rental of the payment kiosk." 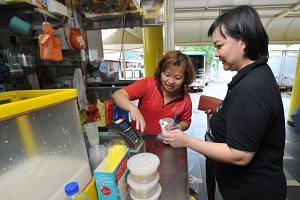 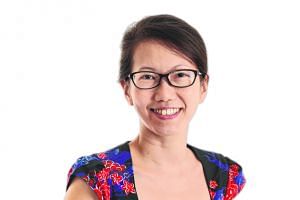 Our e-payment terminal has been down for a few weeks.

NO NEED TO COUNT CHANGE

Queues go by very fast because all customers have to do is tap their cards or put cash in the slots.

MR ILIYAS DZAHIRON, 33, an employee at a seafood barbecue stall. He says he can focus on food preparation without the bother of handling and counting change.

The kiosk consists of both cash slots and the cashless terminal.

Many diners, meanwhile, say that they still prefer to use cash despite the cashless options available.

Finance manager Maurice Wong, 46, told The Straits Times he has used his bank card there once or twice, when he does not have cash.

"I would rather use go cashless for things like online shopping, where I'm not physically there and things cost more than a hawker centre meal," he said.

The hawker centre is managed by Koufu subsidiary Hawker Management, a social enterprise. Mr Noel Chin, a staff of the social enterprise, said: "Most customers have to use the kiosk for both cash and cashless payments. Initially, the hawkers were not used to it, but now, they seem quite happy with the kiosks."

Mr Iliyas Dzahiron, 33, who works at a seafood barbecue stall, said: "Queues go by very fast because all customers have to do is tap their cards or put cash in the slots."

He can then focus on food preparation without the hassle of handling and counting change, he said.

An EZ-Link spokesman told The Straits Times the response at the centre has been "very positive".

"It is a great step towards a cashless society as we slowly integrate cashless payments in daily lives by starting in the heartland."