SINGAPORE - The Urban Redevelopment Authority (URA) announced a new partnership that will support collaborations between the public and private sectors and Singaporeans in shaping the nation's built heritage and identity.

The Heritage and Identity Partnership (HIP) will take on an expanded role from the Conservation Advisory Panel, which ended its last tenure in May.

The panel was formed in 2002 to provide advice to the URA on ways to protect and conserve buildings.

Now, the HIP will also contribute ideas to sustain the built heritage and memories of places, as Singapore continues to develop. Built heritage refers to physical structures or areas with historical value.

URA chief executive officer Lim Eng Hwee said: "Conservation of our built heritage has been done in partnership with the community to ensure that our conserved assets remain meaningful in celebrating our past, and relevant in meeting our current and future needs. We are encouraged that many people are increasingly keen in contributing to Singapore's heritage and identity.

"As we shape up plans for Singapore's continued development as an economically competitive and liveable city, we also want to involve our partners more deeply in building an endearing home that is strong in heritage and identity."

Conserving built heritage has been getting attention from the authorities. 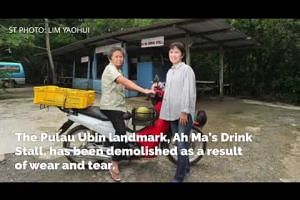 Pulau Ubin's Ah Ma's Drink Stall to be rebuilt with something old, something new... and something blue

Eight shophouses in Jalan Besar to be conserved, another 24 under consideration by URA

Effort is being ramped up, for instance, to look into the restoration of Pulau Ubin's forgotten and neglected traditional kampung houses. The URA is also looking into the conservation of Jalan Besar shophouses.

The HIP comprises 18 members from diverse backgrounds and specialisations. These include people from the building industry, arts and heritage sector, journalism, business and property owners, and academia.

They are appointed on a two-year tenure.

Members will engage in regular dialogue with the URA to address issues concerning built heritage and identity, as well as promote and sustain the heritage and memories of places in development plans.

For example, HIP will be working with the URA in the ongoing Master Plan review, to offer views on ways to integrate built heritage and identity into the plans for new areas.

It will also work with the URA to promote public understanding and appreciation of built heritage and identity. The URA can reach out to the wider public through the HIP members' networks to collect stories about heritage areas, as well as foster greater public awareness about the balanced approach involved in managing development and heritage in Singapore.

Mr Chan Sui Him, incoming chairman of the HIP, said: "Through the conservation of buildings, Singapore has retained significant parts of her heritage landscape. The HIP presents an opportunity for us to go a step further to get more views on board to shape a future Singapore that is familiar and endearing to Singaporeans, even as we continue to progress and urbanise."