Faculty staff and students from the Singapore Institute of Technology (SIT) are already forming ties with the Punggol community ahead of the new campus opening in 2023.

One initiative began in 2017, when the university started collaborating with the People's Association to organise biannual science camps for pri-mary school pupils from lower-income families there.

Around 300 pupils have attended the camps, with the latest one held in June. SIT played host to about 50 pupils, who had the chance to try their hand at being engineers and test basic principles of physics such as Newton's laws of motion.

SIT also co-organised a competition with JTC Corporation this year, with students from Punggol schools invited to send in artwork. The winning pieces will be displayed on hoarding panels around the new campus construction site.

She said: "I have always had a keen interest in drawing since I was young and the competition was a good opportunity to exercise my creativity.

"Even though university is still far ahead for me, I am happy that SIT will be building a campus in Punggol, right next to where I live."

Another initiative involved SIT partnering Greendale Secondary School and four com-munity organisations in May for the inaugural SIT Community Challenge. 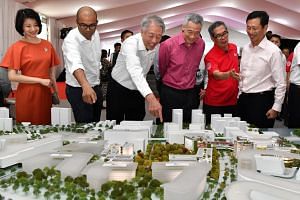 SIT's new Punggol campus to have cutting-edge tech, be connected to community and industry

Masterplan for 'digital district' in Punggol North launched; area to generate up to 28,000 tech jobs

Greendale principal Amy Ng said: "SIT worked closely with the school and the elderly home partners to bring about a very rich learning experience for our students. The students are now more aware of the problems the elderly face."

SIT worked closely with Punggol grassroots organisations to establish a Community Innovation Makerspace at Punggol 21 Community Club, where regular workshops on 3D printing and do-it-yourself hacks are conducted for residents.

Punggol residents told The Straits Times that they are looking forward to having a university in the vicinity, with a large part of it accessible to the public.

Some of these public spaces will include the pedestrianised Campus Boulevard, which will have various retail and food and beverage offerings.

On SIT having a campus in Punggol, Ms Whitney Lin, a human resource administrator and mother of two children aged nine and 19, said: "I think it is definitely a plus point, considering the fact that in the future, my children can save on transportation and housing costs, should they choose to study at SIT."

Ms Lin, 40, added that having new areas for public access within the university would make Punggol a "more vibrant and pleasant place to visit and live in".

Delivery driver Tan Kwang Heng, 50, who has a 17-year-old son studying at Temasek Polytechnic, said: "I think the new campus gives residents in Punggol like myself a very good advantage. It will be the closest university to us, and my child will not have to worry about spending time on travelling.

"Instead, he can spend time with us and focus on his responsibilities as a student."