SINGAPORE - The teacher accused of giving money to her student to buy drugs on her behalf has been dismissed.

Ms Celesta Ee Qiying, a co-curricular activity staff member of Meridian Secondary School, had confided about her methamphetamine consumption to Khairul Naim Mohamad Nasir in 2016. He was still a student of the school then.

In a statement, a Ministry of Education (MOE) spokesman said: "Once MOE was informed of the investigation, we suspended Ms Celesta Ee from duty in September 2017 so that she had no contact with the school. She has since been dismissed from service."

The spokesman said teachers are expected to conduct themselves in a manner that upholds the integrity of the profession and the trust placed in them.

"MOE takes a very serious view of misconduct by teachers. Teachers who fail to comply with our standards of conduct and discipline will be subjected to disciplinary action, including dismissal from service - which was precisely the outcome here," added the spokesman.

Court proceedings revealed that Khairul, now 20, had offered to help the teacher find a cheaper supplier after she complained that hers was charging her too high a price.

After he found a supplier in Geylang, Ms Ee gave him $200 to buy methamphetamine, also known as Ice.

Khairul was caught on Aug 29 last year during a spot check by Central Narcotics Bureau officers. Drugs were found in his home and his urine tested positive for cannabis. 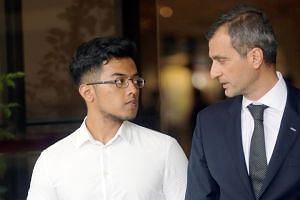 Khairul's lawyer Anil Balchandani said his client never sold the teacher methamphetamine, but bought it on her behalf with her money.

On Tuesday (July 24), Khairul was sentenced to probation of two years and three months after pleading guilty in January to one count each of methamphetamine trafficking and cannabis consumption.

As part of his probation, he would have to stay in a hostel for nine months. He must also undergo drug intervention programmes and perform 210 hours of community service.

His mother posted a bond of $5,000 to ensure his good behaviour.

For trafficking methamphetamine, Khairul could have been jailed for between five and 20 years, and receive five to 15 strokes of the cane.

The outcome of Ms Ee's case was not mentioned in court documents.