Testing started after teacher took ill from disease; school yet to decide on her contract

All the children and staff of a pre-school in Bukit Batok have been screened for tuberculosis (TB) as of yesterday, after a teacher there was earlier diagnosed with the disease.

A total of 24 children and 20 staff members of Little Greenhouse childcare centre were screened yesterday, after an earlier batch of 80 children were tested on Wednesday.

The centre started the screening after a teacher there was diagnosed with TB last Wednesday. The teacher, a Chinese national, is now on medical leave.

When The Straits Times visited the pre-school yesterday, parents could be seen accompanying their children for the screening.

Those above five years old had to take a blood test, while younger children were put through a skin test. Results are expected in around two weeks. 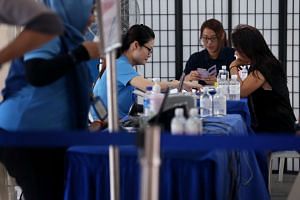 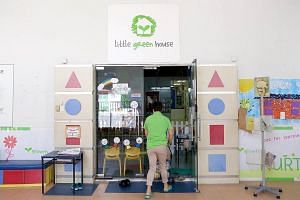 Assistant engineer Suhaidi Jumadi, 36, and his wife turned up yesterday to accompany their son, four, for the screening.

"Of course, I was shocked when I found out about the incident," said Mr Suhaidi who lives in Bukit Batok. "But it's good that they're now having screening for the kids."

The school's deputy chief operations officer, Ms Ruth Kua, said class attendance was about 80 per cent yesterday. Some parents took their kids home after the screening.

But Mrs Annie Tay, 33, a clerk who has two children, aged three and six, in the pre-school, said she did not take her children out of class as she could not find people to take care of her children.

She added: "The kids feel fine... The teacher who fell sick was not in charge of their classes."

There are 104 children - from 18 months to six years old - enrolled at the school in Bukit Batok Street 31.

The Ministry of Health and the Tuberculosis Control Unit did not require the school to close. MOH said on Wednesday: "Persons with active TB disease rapidly become non-infectious once treatment starts... TB transmission typically requires close and prolonged contact with an infectious individual."

While Ms Kua had earlier said she planned to end the teacher's two-year contract early, yesterday she said the school will discuss this with the authorities before making a decision. "Let her have a good rest and recover from her illness first," said Ms Kua.

Currently, foreign workers have to take a chest X-ray to screen for TB before they can start work here, said doctors. Such X-rays, while not foolproof, can help detect if someone has an active TB infection. Those with latent TB are not infectious and do not spread the disease.

It could take years or even decades for latent TB to become active, though most latent cases do not become active TB in the infected person's lifetime, said infectious diseases experts.

Dr Ong Kian Chung, a respiratory specialist at Mount Elizabeth Hospital, said: "Children less than five years old are more susceptible to TB because of their poor immunity. If they catch TB, it can progress very quickly."

If parents observe their children having persistent coughing for two weeks, weight loss and fatigue, they should consult a doctor and preferably get an X-ray done, he added.

A version of this article appeared in the print edition of The Straits Times on August 27, 2016, with the headline 'TB in pre-school: All pupils and staff screened'. Subscribe
Topics:
More
Whatsapp Linkedin FB Messenger Telegram Reddit WeChat Pinterest Print Purchase Article Copy permalink