Singapore's educators deserve applause for the Republic's showing in the latest international benchmarking test conducted by the Organisation for Economic Cooperation and Development (OECD).

Singapore's 15-year-olds took top place, outperforming their peers from 71 other countries and economies in using science, mathematics and reading skills to solve problems.

It shows that the deliberate curricular shifts Singapore has made over the years to emphasise higher-order critical thinking skills have worked in moving our students beyond mastering content knowledge to become problem solvers.

But beyond this, what we need to look out for is Singapore's placing in another Pisa 2015 test result that will be out by the middle of next year. 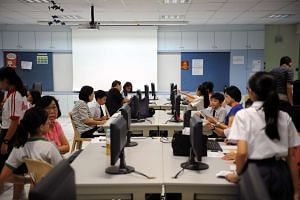 Are you smarter than a 15-year-old? Try these Pisa 2015 questions

It was part of the move in recent years by the OECD to broaden the test to measure other skills that are becoming increasingly crucial to thrive in the workplace.

To assess collaborative problem solving, students were asked to tackle a problem by collaborating with a partner, in this case, a software program.

Students had to use their interpersonal and communication skills to engage the program and pool knowledge and skills to complete a task.

As the OECD explained, the ability to collaborate is a vital skill as much of the problem solving work done in the world today is performed by teams in an increasingly global and computerised economy.

A University of Phoenix Research Institute study has also identified virtual collaboration as one of 10 key skills for the future workforce.

The OECD is looking at testing other skills as well. The next round of Pisa tests, in 2018, is likely to include a new measurement of global competence, which will look at how well students can navigate an increasingly diverse world, with an awareness of different cultures and beliefs.

Broadly defined as the ability to critically analyse global and intercultural issues to aid social cohesion, global competence is a game changer, according to Dr Andreas Schleicher, the education and skills director of OECD.

Writing in the media earlier this year, he said that increasingly, schools also have to ensure that children develop "the navigation skills and the character qualities that will help them find their own way through an uncertain, volatile and ambiguous world". The OECD is looking at testing other skills as well. The next round of Pisa tests, in 2018, is likely to include a new measurement of global competence, which will look at how well students can navigate an increasingly diverse world, with an awareness of different cultures and beliefs.

To assess global competence, students will be tested on their comprehension of a range of global and intercultural issues such as the environment, poverty, economic integration, inequalities and migration.

The test details have yet to be confirmed, but students may be asked how much they know about these topics and then given some source material to exercise their critical and analytical skills, for example, opinions on whether the sources are reliable.

When asked how the OECD picks which skills to test, Dr Schleicher said that the people who design the test look very carefully at the evolution of skills demanded in our societies.

Many of the skills that schools have traditionally emphasised, requiring students to master content, are becoming less important for success in the real world, he noted.

The OECD looks at how the world and the skills that people need are changing, and then tries to reflect that in its measures.