Some questions from the second section, known as Paper 2, were exceptionally difficult, according to parents The Straits Times spoke to.

Three questions have been circulating online after the paper last Friday (Sept 27) and a Facebook post by a parent airing her grievances on Monday was shared more than 1,000 times.

This year's maths paper left some pupils crying, though it is not the first time tough maths questions at the PSLE have been in the spotlight - parents took issue with similarly "tricky" questions at the national examination in 2015 and 2017.

Madam Chia Su Anne, in her 40s, said her friend saw students emerging from school after the paper with "puffy red eyes", while her son said it was harder than his prelim papers but manageable.

"But it's over and we just moved on to the next subject paper, without analysing how he did, as we didn't want him to feel demoralised," said the legal counsel.

Counsellor Cheryl Sim, 49, said her son had also found the exam tough. "He felt so down after the paper. So we gave him more support for the last few papers."

A parent who only wished to be known as Ms Chia said she felt some of the questions would benefit pupils who had extra exposure to maths olympiad-style questions.

"They have been learning so many concepts all these years, and my son said in the end not many of these were tested in Paper 2," said the 38-year-old, who works in the finance industry. 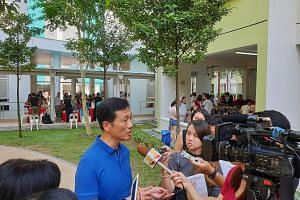 Testing times for Zoe Tay, with son taking PSLE and eldest son telling her not to wear bikini

'Cheryl's birthday' poser is back with Part 2: Cheryl's age

But of the 10 parents ST spoke to, some felt that the questions were manageable.

Parent Michael Ma, 44, an executive at a local company, said he had talked to his son after the paper and looked at the questions circulating online. He felt they were "tricky", but not out of the syllabus scope.

"These questions could differentiate the best students from the good ones," Mr Ma added. "With a good understanding of the syllabus, a pupil should be able to do well."

A spokesman for the Singapore Examinations and Assessment Board said questions in the national exams are based on topics within the syllabus. The aim is to "assess students' ability to understand and apply concepts".

"For each national examination, there will also be a balance of basic, average and challenging questions so that the overall standard of the paper is maintained from year to year to cater to a wide range of student abilities."

Educators said it is typical for some questions every year to be more complex and require some level of creativity.

One question asked pupils to figure out patterns in a set of triangles, while another required them to find the diameter of a circle, given a set of semi-circles and measurements.

"It just takes some patience and the ability to stay calm in the exam hall to try different methods of visualising and solving a question."

But parents said that it is unreasonable to expect children to think creatively under pressure and time constraints.

Mrs Goh Su-Ling, 47, who works in a charity organisation, said some questions seemed to be more a test of IQ than maths skills.

She added that her daughter had been unable to solve two questions - though not any of the three circulating online - despite doing consistently well in maths in school, even scoring 97.5 marks at the prelims.

"The standards seem to be higher than what is to be expected of mainstream children."

Senior clinical psychologist Jessie Chua said that encountering a difficult exam can cause anxiety and stress, which is a normal reaction.

But the tricky issue, she added, is that an 11- or 12-year-old brain has yet to develop "efficient frontal lobe functions" to process these situations.

"They may not understand these 'normal human experiences' to be part and parcel of life, with some possibly believing that they have failed terribly.

"If students have invested significant time and effort into revision, and yet are faced with questions that may not be based on said school curriculum taught by their teachers, this may create in some students a sense of helplessness where no matter how hard they try to excel academically, it will never be enough."

She added: "I urge parents to constantly remind their children that a difficult exam is not representative of one's self-worth, character or intelligence."