SINGAPORE - One way to help children from disadvantaged homes is to motivate their parents, which can be done by getting other parents who have successfully overcome similar parenting problems to show them the way, said a social worker.

Ms Joy Lim, deputy director of Singapore Children's Society, made the suggestion on Tuesday (Nov 27) following an idea-sharing session with a new inter-agency task force called Uplift, whose goal is to help these children level up.

Said Ms Lim: "As professionals we can only do so much... What we want to do is to give these parents hope through examples, to show them that it is doable, it is possible to overcome certain barriers in life."

She was among 30 participants, mostly social workers, who came up with a slew of ideas at the three-hour session on Tuesday at Radin Mas Community Club.

These include better coordination and sharing of information among organisations, agencies and schools, as well as having positive role models for the students, especially in the absence of their parents.

No less important is to have a common understanding of what families go through, they said, especially when they face multiple difficulties that range from employment issues to school absenteeism and mental health problems.

Second Minister for Education Indranee Rajah, who heads Uplift, told reporters after the session that the input from social workers is invaluable as "they are at the front line, dealing with these families day to day". 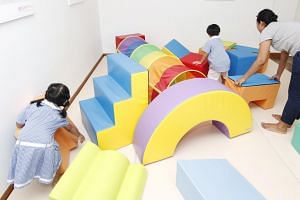 Task force to look into helping disadvantaged students across all ages

The session is the third by Uplift, which is short for Uplifting Pupils in Life and Inspiring Families Taskforce. The first two meetings were with primary school and secondary school teachers and leaders.

Helping these children is a difficult undertaking because the issues their families face are complex and manifold, noted Ms Indranee.

The children very often don't have something that keeps them emotionally stable, she added. "You want the children to have a place or person that they can go to which makes them feel safe, enables (them) to share, and therefore are able to grow."

They love their children but are weighed down by stresses, and so they need, for instance, help to make the right choices or be equipped with parenting skills when their children are young, said Mr Indranee.

Agreeing, Ms Lim mooted the idea of motivating them with "advocates", who are parents who have worked through similar difficulties.

Underlining the need for leadership and cooperation, she said: "Someone needs to rally everyone together. It doesn't need to be about co-locating agencies but sharing data and having an integrated approach."