The Singapore Management University (SMU) yesterday started the construction of a new, environmentally friendly building in Stamford Road that will facilitate hands-on learning for its students.

Called the Tahir Foundation Connexion, the fully solar-powered, $70 million development will support the university's SMU-X programme that started in 2015.

SMU-X is designed to mimic the workplace and allows students from different disciplines to tackle real-world challenges by taking on projects from corporate, non-profit and government sector organisations. This means students will soon have more opportunities to network with start-up founders and mentors, and work on real-world projects.

The new five-storey building will feature facilities such as student lounges, sleeping pods, shower amenities and a "makerspace" that is equipped with 3D printers and handyman tools that students can use to create and build prototypes for SMU-X projects.

About 500 sq m of the 8,600 sq m development will be set aside as incubation spaces for start-ups. It will be able to accommodate at least 80 start-ups a year, up from 40 now.

Preparations for the construction began in the first week of this month and works are expected to be completed by the end of next year.

The building will be funded by a donation from the Tahir Foundation, a philanthropic organisation, and a grant from the Building and Construction Authority (BCA) under the Public Sector Construction Productivity Fund. It is designed to meet the BCA's Green Mark Platinum certification. It is the first on-site net zero energy building in the city centre, which means it is self-sustainable as it generates its own power. Its green features, such as dimmable LED lights and predictive building control systems, among others, will save more than 500MW-hours of electricity a year. 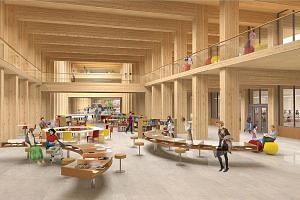 A BCA spokesman said 500MWh is equivalent to the annual electricity consumption of about 110 four-room Housing Board flats.

According to the Energy Market Authority, the average monthly electricity consumption of a four-room HDB unit was 387KWh in 2015.

Mr Desmond Lee, Minister for Social and Family Development and Second Minister for National Development, said at yesterday's ground-breaking ceremony that the completion of the building "will take us another step forward in our aspiration of achieving super low energy or even zero energy buildings in Singapore".