SINGAPORE - Singapore students are world-beaters not just in science, mathematics and reading, but also in the ability to solve problems in teams, according to new findings from the Organisation for Economic Cooperation and Development (OECD).

The Republic emerged tops in a global test of collaborative problem-solving skills that was part of the OECD's Programme for International Assessment (Pisa) test conducted in 2015.

Singapore had the highest mean score of 561 points, followed by Japan with 552 points, Hong Kong with 541 points and South Korea with 538 points.

The Pisa Collaborative Problem Solving results, released on Tuesday (Nov 21), is the first assessment of such skills to help countries see where they stand in preparing students to live and work in an increasingly interconnected world where collaboration is needed.

Some 125,000 students across 52 economies around the world took part in the test, which measures students' ability to solve problems collaboratively, negotiate and come to agreements, for instance. 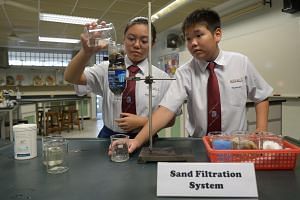 Students work in teams to solve problems in water, energy and food sustainability

The Pisa test has traditionally assessed abilities in science, mathematics and reading - core subjects in which Singapore was also ranked first in the latest 2015 exercise - but is broadening its reach to include skills that are increasingly important and relevant in the new economy. 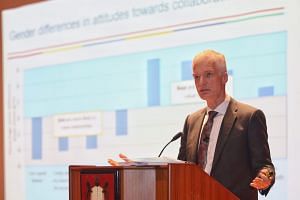 Singapore students ace collaboration, but will they top test on global thinking and creativity?

Singapore had the highest proportion of top performers - more than 20 per cent of students here achieved the highest level of proficiency - Level 4 - in collaborative problem solving.

This means they could carry out complicated tasks that needed high levels of collaboration, maintain an awareness of group dynamics and had the initiative to take action or make requests to overcome obstacles and resolve disagreements.

On average, across OECD countries, only 8 per cent of students could perform at this level.

The results also showed that students in Singapore have positive attitudes towards collaboration. More than 90 per cent of them said they are good listeners, enjoy seeing their classmates be successful, take into account what others are interested in and like cooperating with their peers.

Dr Andreas Schleicher, OECD director for education and skills, who presented the findings to principals at a seminar on Tuesday, said: "Singapore demonstrates that strong academic performance does not have to come at the expense of weaker social skills. In fact Singapore scores even better in collaborative problem-solving than it does in science and mathematics." Mr Sng Chern Wei, the Ministry of Education's deputy director-general of education (curriculum), said the results show that Singapore is on the right track, and reaffirm schools' efforts to create group learning experiences through initiatives like project work, community projects.

"We need to ensure that such experiences are common for every student and they are able to benefit fully from them," he said.

To assess collaborative problem solving, students were asked to tackle a problem by collaborating with a partner, in this case, a software program.

In a computer-administered assessment that simulates team members, the student interacts with conversational agents via chat messages, to undertake tasks such as answering contest questions, preparing for a presentation and planning a field trip.

Besides gathering information and devising strategies, they had to consider what their team members knew, determine who takes which actions and maintain assigned roles.

MOE noted that the study design is a standardised way of measuring and comparing collaborative problem-solving skills, but real-life settings may be more complex as human beings are less predictable.

Principals said teamwork is part and parcel of students' school life in and out of classrooms. Mr Ling Khoon Chow, principal of Beatty Secondary School, said: "In most subjects, there will be some form of group work."

In his school, Secondary 2 students work together on a historical investigation project on the lives of local pioneers. "They had to research, decide on how they want to present their project then communicate it to the rest of their classmates," said Mr Ling.

"The problems (in today's world) moving forward are quite unique. The answers do not come so readily so these are important skills for the students to pick up."