SINGAPORE - Calling on parents to support the recent changes to the education system, Prime Minister Lee Hsien Loong on Saturday (Jan 5) said students in Singapore schools are being equipped with not just the skills to earn a living, but also those that help develop character and values.

This is because for the Republic to succeed, Singaporeans must not only be well-educated citizens and well-trained workers, they need to have "intangible but essential values", he added.

Addressing 242 Ministry of Education (MOE) Edusave Award recipients, and their families, at Townsville Primary School, PM Lee said there is a need for students to understand the world, and to feel a sense of nationhood and community.

They must also have the "resilience and determination to overcome adversity, defend ourselves, prosper and thrive in the world".

"That depends not just on what knowledge you have picked up in school - language, science and mathematics, economics and history - but also the intangible but essential values - caring for your classmates and fellow citizens, being willing to contribute to the common good, taking pride in our country, and standing up for it," he added.

The Bursary Awards are given to students from lower-income families, while MOE Edusave Awards - ranging from $100 to $500 - recognise those who have excelled in academic and non-academic aspects.

PM Lee, who is also an MP for Ang Mo Kio GRC, said recent changes to the education system will make learning more meaningful for students.

These include reducing the emphasis on academic results, dedicating more curriculum time to deeper learning, and helping students draw the link between textbook content and the real world.

"We want to inculcate in young Singaporeans the passion to 'Learn for Life' so that they are prepared for the future economy," he added.

He called on parents to understand what the Government is trying to achieve, and support it in its objective.

As for students, PM Lee said they should "take advantage of the opportunities to learn as much as you can, both in knowledge and also values from your teachers and friends".

Lim Zhe Wei, a Primary 4 pupil from Teck Ghee Primary School whom PM Lee cited in his speech, was one of those who received an MOE Edusave Award.

The first-time Edusave Character Award winner had lost his father in October 2017 due to complications from a bacterial infection. 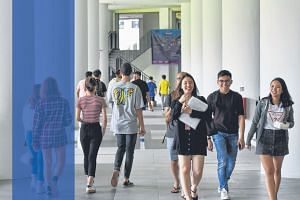 Pushing further away from grades and book smarts

Society must work together to change negative perceptions of streaming: Indranee Rajah

Long-term policies in place and strong team in charge: PM

"He had initially complained of being cold, and started having bouts of vomiting. Before we knew it, he was warded in the hospital intensive care unit for a month, and then passed away," his mother Feng Biao Mei, 46, a factory worker, said in Mandarin.

The nine-year-old, whose elder sister is in Primary 5 in the same school, overcame adversity to excel in his studies, and even took up the responsibility of class monitor in the second half of the school year.

"My teacher picked me to be class monitor. At first I said no, but he encouraged me and told me to try," said Zhe Wei.

"I had to take care of the class, tell my classmates to read their books when the teacher was not around, and help the teacher carry books from the classroom."

He added: "I felt good I could help other people."